It seems like the Xiaomi Mi 5C got certified in China. A couple of Xiaomi-branded smartphones surfaced on the China Quality Certifications center (3C or CCC), and they’ve been certified under 2105212, 2016089, 2016101, MAE136 and MBE6A5 model numbers. Now, if the source is to be believed, only one of these devices is the Xiaomi Mi 5C aka Xiaomi Meri, the MAE136 unit. This listing did not exactly reveal Xiaomi Mi 5C’s specifications, but it did share at least some info when it comes to the company’s upcoming smartphone, read on.

According to the certification listing, the Xiaomi Mi 5C will use a 5V/2A power adapter, which suggests that we won’t see fast charging available for this smartphone, and that seems quite odd, one would expect that the company’s mid-ranger comes with fast charging capabilities. In any case, the Xiaomi Mi 5C has been leaking for a long time now, for months, and the company still did not introduce this smartphone. The device is rumored to ship with Xiaomi’s in-house SoC, the so-called Pinecone SoC, and that seems to be a mid-range processor. In addition to that, the phone will probably sport a 5.5-inch fullHD (1920 x 1080) display, along with 3GB of RAM and 64GB of native storage. A 12-megapixel snapper will be placed on the back of this smartphone, if rumors are to be believed, and an 8-megapixel shooter will be available on its front side. Android 6.0 Marshmallow is expected to come pre-installed on the Xiaomi Mi 5C, and on top of it, you’ll get the company’s MIUI 8 OS. 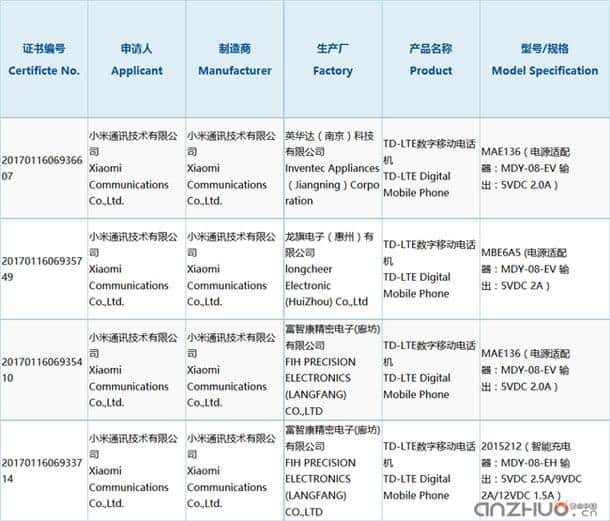