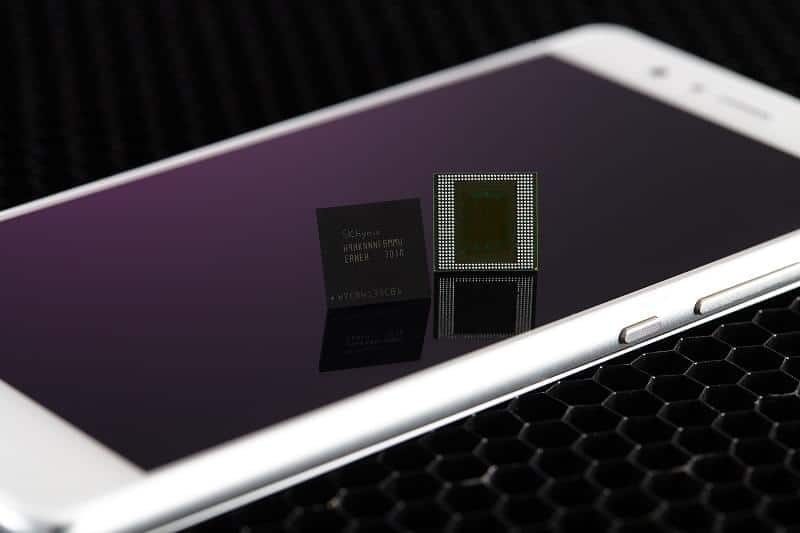 A South Korean semiconductor maker SK Hynix launched a new 8GB LPDDR4X mobile DRAM chip on Monday. The Icheon-based company said it's currently planning to mass produce the chip in the coming months and offer it to all original equipment manufacturers looking to ship flagship phones with 8GB of RAM, the highest possible density in the LPDDR4X standard which is approximately 20% more efficient than the LPDDR4 standard. Apart from being more efficient, the company's new silicon also takes 30% less space than conventional LPDDR4 chips. As of today, phone makers can start experimenting with SK Hynix's latest chip, but no collaborations have yet been officially confirmed. Regardless, industry sources claim that the chip will possibly be powering the upcoming Galaxy S8 and the iPhone 8, though the former doesn't seem likely seeing how Samsung already has its own 8GB mobile chip in the works.

SK Hynix's new silicon consists of two 8 Gigabit chips manufactured in a dual configuration with four layers, which results in a chip boasting 64 Gigabits, or 8GB of DRAM. The South Korean tech giant said that while this chip is one for the future, it will still likely see a commercial debut over the course of 2017. SK Hynix is Samsung's main domestic competitor in the semiconductor market, and the Hyundai-owned company presented this cutting edge silicon only a couple of months after Samsung announced a similar chip. Samsung's 10nm 8GB module is precisely the reason why it's unlikely the latest rumors about the LPDDR4X powering the Galaxy S8 are accurate. Seeing how Samsung is directly competing with SK Hynix and boasts larger production operations, it wouldn't make a lot of sense for the company to opt for a competing product even if it's somewhat better than what its own chip-making division came up with, as SK Hynix claims it is.

Of course, stranger collaborations have happened, but as things stand right now, Samsung will probably opt to use its own LPDDR4 chip in the Galaxy S8. More information on that front is bound to follow soon as the South Korean phone maker is expected to debut its latest and greatest flagship at a dedicated New York City event in April. In the meantime, SK Hynix is bound to find at least one customer for its high-end LPDDR4X silicon.