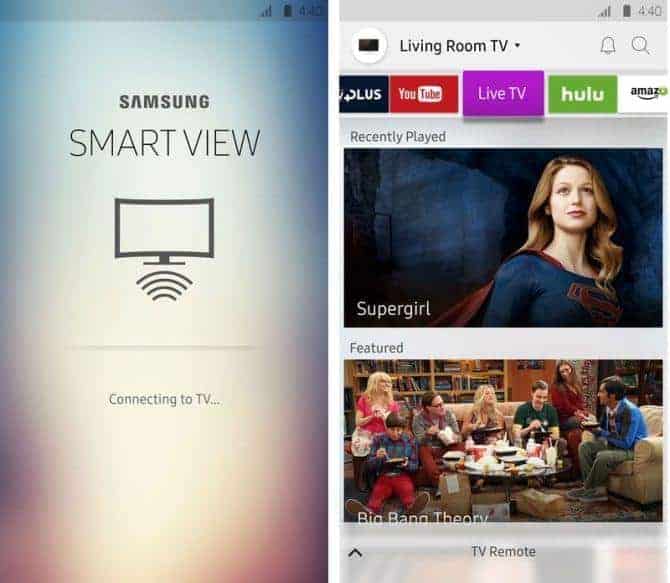 An app update for the iOS version of the companion app for Samsung's Smart TV offerings, Smart View, dropped recently, and seems to show a content streaming and remote control service in the screenshots, not unlike what one would get by using a Google Chromecast. That is to say, the function seems to allow the phone to serve as a remote for the TV without actually having to play the content on the phone. This could even free up the phone to do other things, but there is no way to confirm that at the moment; the screenshots that seem to show this functionality show off a number of content providers, with Netflix absent as always, but don't go any further than that.

Samsung's Smart TV devices have always been able to stream content from a phone or mirror the phone's output, but have thus far not had the sort of 'set it and forget it' functionality that Chromecast devices boast. Samsung's Smart View app has always been able to beam content to Samsung's Smart TVs, but has never acted as a background remote, requiring the app to remain active on the host phone or PC as long as the content is being beamed. The app has also been focused on letting a user stream their own content, rather than connecting the Smart TV to content providers like Hulu and YouTube. Tabs for local content and Samsung's own TV Plus streaming channels are also on board, which means that the new menu shown in the screenshot is likely to replace the current state of the app entirely.

Samsung's Smart TVs' ability to stream content and mirror devices' displays has long been a central selling point, and this new functionality could make that into an even stronger argument. The app update shown does not specify in any way what Smart TV models it may or may not work with, so it is entirely possible that Samsung will limit the functionality to newer models. For now, such an update has not showed up for either the Android or PC versions of the Samsung Smart View app.