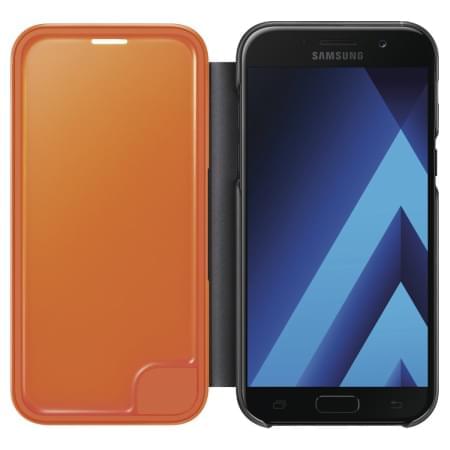 Official Samsung cases and covers for at least two of the newly-launched Galaxy A (2017) smartphones are now up for sale on European online retail site, MobileFun. The South Korean tech giant is offering four distinct lines of official merchandise that costs anywhere between $18.49 at the lower-end and $55.99 at the higher-end. The accessories, though, are currently available only for the Galaxy A3 (2017) and the Galaxy A5 (2017) by the looks of it. There's no word on when official Galaxy A7 (2017) accessories will be available for purchase. The products include the Clear Case Covers, Clear View Case Covers, S-View Case Covers and Neon Flip Wallet Covers. The S-View Flip Covers, though, are listed only for the Galaxy A5 (2017) and not for the smaller, more affordable handset.

Taking a quick glance at the products that are up for sale right now, first off, there are the Clear Cover Cases that are the most affordable of the lot by far, and costs just $18.49 a pop. The Clear View Covers, meanwhile, are at the other end of the spectrum, and comes with the highest price-tag. They are available in Black, Blue, Pink and Gold, and buying one will set you back by a cool $55.99. The S-View Cover, as mentioned already, is currently unavailable for the Galaxy A3 (2017), but the one available for the Galaxy A5 (2017) comes with an asking price of $42.99. The Neon Flip Wallet Covers, meanwhile, cost $30.99 apiece and just like the Clear View Cases, come in Black, Blue, Pink and Gold.

While the global smartphone industry is truly massive in its scale and scope, the accessories sector has also grown by leaps and bounds over the years, with many third-party brands also selling a lot of products tailored to the needs of consumers around the world. Olixar is one such company that designs and markets mobile accessories, such as cases, covers, Bluetooth headsets, chargers, batteries etc. The company recently launched a whole bunch of cases and covers for Samsung's latest smartphone range, with the promise of stylish design, durability and robust protection. Those accessories cost a bit less than the official merchandise from Samsung, with prices starting at just $5.49 a pop.

Advertisement
A3 2017 Cases A5 2017 Cases
Advertisement
Trusted By Millions
Independent, Expert Android News You Can Trust, Since 2010
Publishing More Android Than Anyone Else
2
Today
188
This Week
108
This Month
4093
This Year
105570
All Time
Advertisement