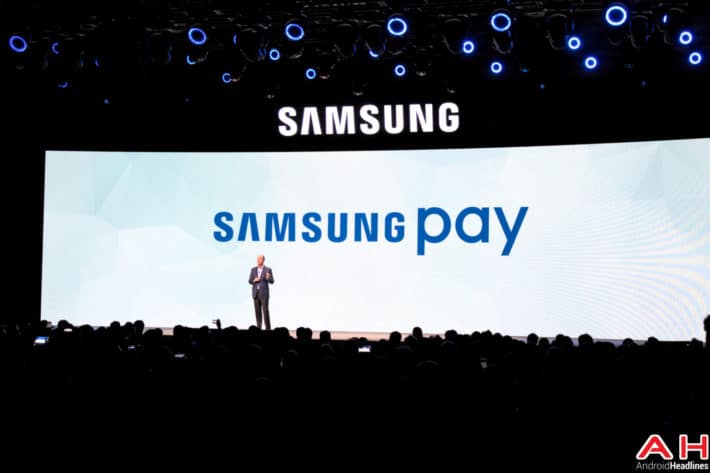 The Vice President and General Manager of Services and New Business at Samsung Electronics America, Nana Murugesan, today announced that use of Samsung Pay has almost doubled following the introduction of Samsung Rewards. Samsung Pay is the South Korean conglomerate’s mobile payment system, which has been available on high-end Samsung devices for some time now, but for 2017 will be available on all, or nearly all, Samsung smartphones. Samsung Pay has the advantage that it is compatible with the majority of existing till systems and does not require new, NFC-enabled equipment to be installed by the retailer – as the payment technology can use the magnetic strip card reader. Samsung Rewards is the points-based incentive system implemented for Samsung Pay customers, which rewards customers with points per transaction, which may be redeemed for discounts on Samsung products. Samsung is keen to remind customers that they receive Samsung Rewards points in addition to any similar scheme in place by the underlying bank or credit card connected to Samsung Pay.

Murugesan has been speaking today on a panel at the Consumer Electronics Show, or CES, hosted in Las Vegas. He explained: “Innovations like Samsung Rewards are giving consumers a real incentive to embrace Samsung Pay. We are seeing that people are more likely than ever before to try mobile payments – with the number of daily users doubling every week since the launch of Samsung Rewards – thanks to the tangible benefits they experience.” In total, the number of transactions has nearly doubled and December 2016 saw a new record, no doubt fuelled by shoppers using their Samsung smartphone to quickly and conveniently pay for holiday gifts. In addition to the number of transactions being put through Samsung Pay, the company has also seen an increase in the number of what it is calling “power users,” that is, those customers making frequent (“almost once every day”) payments using the technology. Here the number of regular customers has been doubling every week since the introduction of Samsung Rewards, and this is particularly good news as it appears to show how once customers start using Samsung Pay, they continue to do so. Ultimately, regular users of Samsung Pay will be loyal to the technology and as such, Samsung hopes the brand. Furthermore, the more transactions, the greater the revenue that Samsung will generate from this side of its business.