The Samsung Galaxy S6 Edge+ was released some months after the two smaller devices back in August 2015. The device is based around slightly improved hardware compared with the Samsung Galaxy S6 and Galaxy S6 Edge. The most obvious difference is that the Galaxy S6 Edge+ has a larger, 5.7-inch, QHD resolution AMOLED panel. Under the display the device has the same Samsung Exynos 7420 chipset as the two smaller devices, but is backed up with 4 GB of RAM rather than the smaller model’s 3 GB. There’s at least 32 GB of internal storage, a 16MP rear camera and a 5MP front facing camera for selfies and video chatting, plus a 3,000 mAh battery with support for both wireless and fast charging technologies. Samsung have given the Galaxy S6 Edge+ a front-mounted fingerprint sensor plus a heart rate and SpO2 sensors, which are useful for the Samsung S Health application and service. Even today, the Exynos 7420 remains a very capable System-on-Chip and the device has plenty of memory, so it should be capable of running Android 7.0 Nougat very well.

However, at this time we have no official word as to when exactly Samsung are planning on releasing the software update to Android 7.0 Nougat for the Galaxy S6 Edge+. We will have a better idea once the new software is available for the Galaxy S6 and Galaxy S6 Edge; although we do know that it will be before the end of June 2016. 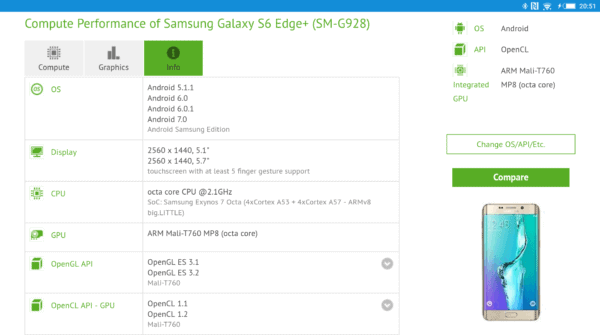