As you can see, Huawei’s exec revealed quite a few details about the upcoming device already, but a third-party source also decided to add some info on top of what Mr. Yu said. According to a new rumor, the Huawei P10 will not sport a curved display, while the Huawei P10 Plus will ship with a curved panel. If you take a look at the image down below, you’ll also see the alleged Huawei P10 in the flesh, though do keep in mind that this is just a leak, and the image isn’t all that great as it’s quite small, so we don’t get to see that many details in it. The device seems to sport a dual camera setup on the back, while both its power / lock and volume rocker keys are placed on the right. The home key is placed below the display, and the fingerprint scanner seems to be placed on the back of the device, which is quite interesting considering there’s already a button up front, one would think that the home button will double as a fingerprint scanner.

Now, according to previous rumors, the Huawei P10 and Huawei P10 Plus will be fueled by the Kirin 960, even though some rumors even suggested that the two devices will ship with the Kirin 970, but that’s highly unlikely considering that the Kirin 970 almost certainly won’t be ready to go by the time these two phones get announced. The two devices will probably ship with 4GB / 6GB of RAM, and QHD (2560 x 1440) displays are also expected. Leica’s lenses will, once again, be utilized by Huawei, as the company will place them on top of Huawei P10’s camera sensors. 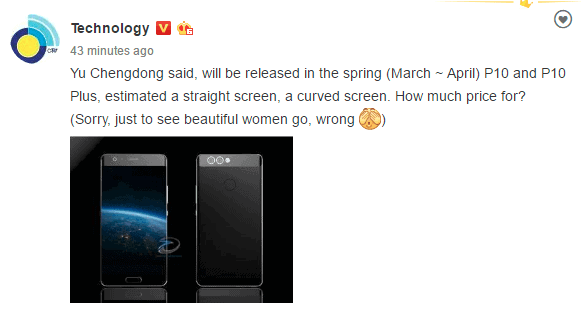 Advertisement
Trusted By Millions
Independent, Expert Android News You Can Trust, Since 2010
Publishing More Android Than Anyone Else
5
Today
5
This Week
5
This Month
1306
This Year
111415
All Time
Advertisement