The Galaxy S8 is one of the most anticipating smartphones of 2017, and according to a new report, Samsung is aiming to sell 60 million Galaxy S8 units in 2017. A new report surfaced in Samsung’s homeland, South Korea, and it seems like the company has huge plans for their upcoming flagship, as they’re aiming to outsell every other smartphone that they’ve released in the last couple of years, which is quite interesting, read on.

“The tech giant has requested its partners to supply (parts) based on the tech giant’s 60 million shipment goal,” says the report. Now, 60 million seems like a lot, even by Samsung’s standards. For comparison’s sake, let’s see how many units of their previous flagships did Samsung manage to sell. Let’s start with the Galaxy S3, Samsung had sold 65 million of the Galaxy S3 units, which is also one of their best selling flagships ever. The Galaxy S4 managed to outsell its predecessor, as Samsung sold 70 million Galaxy S4 units, and this seems to be their best selling Galaxy S-branded device ever. Now, the Galaxy S5 did not do so well for Samsung, compared to its predecessors, as Samsung sold ‘only’ 45 million Galaxy S5 units. 45 million is also a magic number for the Galaxy S6, and the Galaxy S7 numbers are still not in, but if predictions are accurate, then the company managed to sell 48 million Galaxy S7 units.

So, as you can see, Samsung is quite optimistic when it comes to the Galaxy S8 sales numbers, but it can be done. The company always manages to sell quite a few ‘Galaxy S’ smartphones, year after year, and the Galaxy S4 seems to be the most successful flagship for the company to date. Well, if Samsung’s predictions are accurate, the Galaxy S8 might come close to the Galaxy S4, maybe even outsell it, who knows, especially following the Galaxy Note 7 fiasco, as many consumers are holding out for the Galaxy S8 to replace their Galaxy Note 7 unit which they had to return. In addition to everything that was said here, the source also claims that the Galaxy S8 will launch in April, which is definitely not the first time we’re seeing such info out there. All in all, the Galaxy S8 will be launched in a couple of months, and we’ll probably see quite a few new rumors / leaks before that happens. 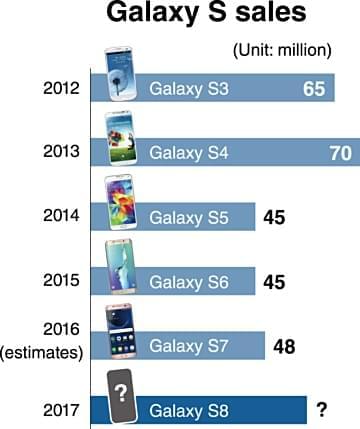