If you are a Facebook or Messenger user then you are advised to restart your applications in order to avoid issues with battery life. More precisely, yesterday numerous Facebook and Messenger users have shared their complaints of poor battery life on their smartphones via Twitter, and as it turned out the issue was caused by the Facebook / Messenger application. Thankfully the problem seems to have been resolved, but assuming that you’re still experiencing battery life issues caused by Facebook’s apps then you are advised to restart them.

In response to the numerous complaints brought on Twitter by Facebook and Messenger users regarding poor battery life, Facebook’s Vice President David Marcus confirmed that indeed, there was an issue which has now been “isolated and fixed server side.” He added that Facebook and Messenger users who may still experience battery life issues are advised to restart their applications in order to solve the problems. If this doesn’t work then you may also want to try rebooting your phone or reinstalling the Facebook and Messenger applications. It’s also advised to use the public Facebook application rather than the beta version, although it’s worth noting that the battery life issues experienced yesterday have affected users of both the official and beta applications. In any case, Android smartphone users can check if their Facebook and/or Messaging applications draw more battery juice than they should by heading down to the “Settings” menu and further into the “Battery” sub-menu. Once there, users can review a number of applications and services listed in accordance with their battery usage, from highest to lowest. Needless to say, if the Facebook or Messenger apps sit at the top of the list then you are advised to close the applications from the recent apps menu, relaunch them, and see if the situation improves. 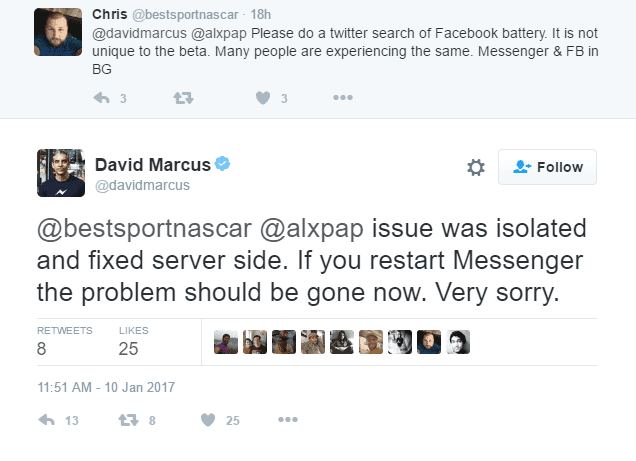