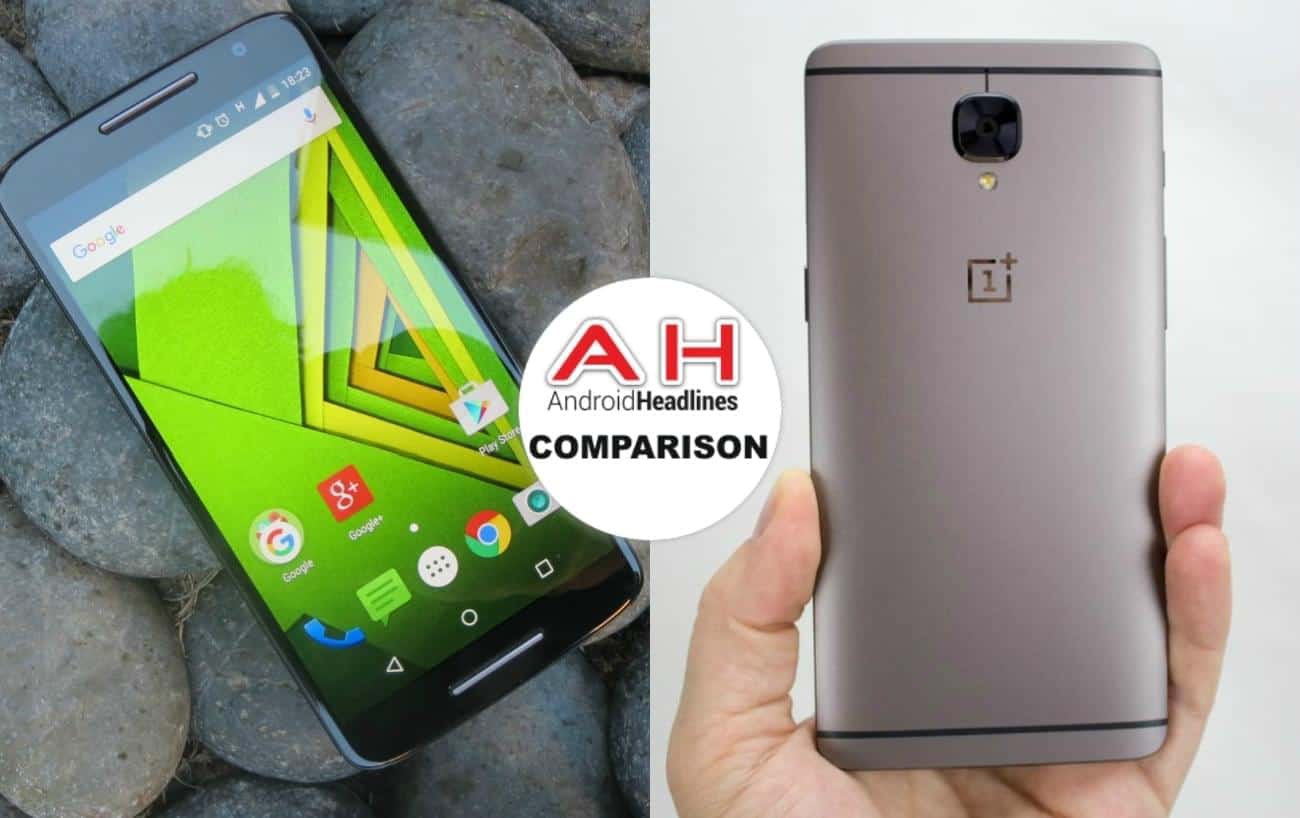 Do we have a good one for you today – the Moto Z Play goes up against the OnePlus 3T. The Moto Z Play belongs to the Moto Z family and even though it is the midrange version, it can still accept the Moto Mods use on the Moto Z and Moto Z Force. Physically it looks very similar except it comes with a glass back rather than a metal back like its siblings. The OnePlus 3T is a mid year upgrade of the OnePlus 3 with identical looks but upgraded specifications. Which one of these devices has what it takes to win this competition? Let's see just what these two smartphones have in common and just how much they differ.

For similarities, we can start with the physical dimensions, although the Moto Z Play is slightly larger and weighs a mere 7 grams more. Both devices use a 5.5-inch AMOLED display with Full HD resolution. They both use a Snapdragon processor and an Adreno GPU, but different models. The Moto Z Play and OP3T both use a 16MP sensor for the primary camera and take excellent photos. They both have a large, non-removable battery with rapid charging capabilities. They both enjoy a fingerprint sensor for unlocking the device or authorizing mobile payments. The usual suspects are here – WiFi, Bluetooth (v4.0 in the Z Play and v4.2 in the OP3T,) GPS, NFC, and a reversible Type-C port for charging and data transfer.

Please take a thoughtful look at the detailed Specifications Comparison chart below and here you will see just how these two great devices stack up against one another – click on the "View Full Comparison" link at the end of the chart to expand the details. After that, we will look at each device in greater depth and point out some of its pros and cons. From all of this information, we will try to determine the winner based on specs and execution of design and functions.

The Moto Z Play is the most affordable of the three Moto Z phones, but that does not mean that it is not well equipped. It comes with a large battery and very quick charger, a Full HD Super AMOLED display, a great 16MP camera, and the ability to add Moto Mods. The Moto Z Play is a metal trimmed, glass backing, with a solid build, and 7mm thickness. The Moto Mods allows the smartphone to stay intact as the Moto Mods 'snap' onto the back with magnets and are steadied by the protruding camera ring.

The Moto Z Play sports a 5.5-inch Super AMOLED Full HD display with a resolution of 1920 x 1080 pixels and 403 pixels-per-inch (PPI.) Lenovo went with the Snapdragon 625 octa-core processor clocked at 2.0GHz, and it works with an Adreno 506 GPU to handle the graphics. The Z Play packs 3GB of DDR4 RAM and offers 32GB of the faster UFS 2.0 internal memory that is expandable via a microSD card.

The primary camera uses a 16MP sensor with a large aperture of f/2.0, laser and PDAF, and dual-tone flash. For its front-facing camera (FFC) it uses a 5MP lens with a f/2.2 aperture and even includes its own LED flash for selfies and video chatting. The Moto Z Play uses a large 3510mAh non-removable battery but comes with one of the fastest chargers available – a Turbo Charger – it can charge the Moto Z Play battery up to 50-percent in only 20 minutes. You can also purchase an $89 Moto Mod that will increase the battery by 2200mAh and it even adds wireless charging capabilities.

The Moto Z Play gives us back the 3.5mm earphone jack. The Moto Z Play can utilize Moto Mods that can add features to your device as well as customized covers for the back to help personalize its looks. The Z Play is part of the Droid series that is exclusive to Verizon, but there is an unlocked Moto Z Play that everybody can use. It has a nano-coating for water resistance, but it is a shame they didn't take it further and make it a sealed phone. It measures in at 155.9 x 75.8 x 7mm and weighs in at 163 grams. It comes in four colors – Black or White with pricing at $408 at Verizon.

OnePlus decided to update their OnePlus 3 and call it the OnePlus 3T. They are identical looking except for a subtle color change to a Gunmetal color, a slightly faster processor (10-percent), a larger battery (3000mAh to 3400mAh), an improved scratch-resistant lens cover on the primary camera, and updated the size of the memory storage capacity. Most likely, OnePlus wanted to increase holiday sales rather than wait until the usual spring launch date, and now we cannot wait to see what OnePlus has in store for the spring. We are looking at an all-metal device that has excellent build quality, but how does it hold up to the Moto Z Play?

OnePlus has always shied away from QHD displays, and the OnePlus 3T does not disappoint by coming with a Full HD display. It does sport the OnePlus 3T's new 5.5-inch Full HD Optic AMOLED display with a resolution of 1920 x 1080 pixels and a respectable 401 PPI. OnePlus up the stakes in the processing department on the OnePlus 3T to include the new Snapdragon 821 with the same sized dual-core clocked at 1.6GHz and another at 2.15GHz and running an Adreno 530 GPU for excellent graphics. OnePlus then packed in a full 6GB of DDR4 RAM and 64GB of the faster UFS 2.0 non-expandable internal storage, although you can now order 128GB of internal memory.

OnePlus did a great job upgrading the camera area on its original OnePlus 3, and it carries over to the OnePlus 3T. It uses the same parts and pieces but does have a more scratch-resistant sapphire covered lens, with fast PDAF, LED Flash, a large f/2.0 aperture, and OIS for extra stability. The FFC camera increased from 8MP to a whopping 16MP with a f/2.0 aperture for terrific selfies and video chatting. The OnePlus 3T has a non-removable battery that increased to 3400mAh and includes their Dash Charge that will give you up to a 60-percent charge in only 30 minutes.

OnePlus is finally playing in the same league with the 'big boys' by including both a fingerprint sensor and NFC chip on their OnePlus 3T. This combination will allow the device to make mobile payments and Android Pay purchases with a swipe of the finger. It runs mostly stock Android 6.0.1 Marshmallow out-of-the-box with OnePlus' OS called OxygenOS on top with Nougat now rolling out. The OnePlus 3T measures 152.7 x 74.7 x 7.35mm and weighs in at 158 grams. It will cost you about $440 USD for the 6GB/64GB model and about $480 for the 6GB/128GB model. There is a choice of Gunmetal, and more recently, Soft Gold was added to the list.

Choosing between the Moto Z Play and OnePlus 3T was a tough decision, but I opted for the Moto Z Play as the winner of this comparison. True, it does have a lesser processor, GPU, and less RAM, but it also has a great design, solid build, and takes great photos. It should receive software updates quicker, expandable memory, and can accept Moto Mods and runs on all major US carriers.

The improved OnePlus 3T is also a solid device with no bells or whistles. It has a better processor and GPU, and more RAM. However, it is hindered by non-expandable memory and the lack of carriers in the US – AT&T or T-Mobile are your only choices.

With both devices costing around the same amount – the Moto Z Play is a little cheaper – it seems like the Moto Z Play offers more options. While it may have a more mid-range processor, it handled everything we could throw at it during our review – it is simply a more exciting device.