Do we have a good one for you today – The LG V20 takes on the newest Huawei Mate 9. The LG V20 is made from aircraft grade aluminum and is one of two of LG’s flagship devices. It is geared more towards those that enjoy photography and those that want great sounds through their earphones. The new Mate 9 is an all-metal device that follows the general Huawei design with small bezels, curved sides and back, making it comfortable to hold. It too is designed for the photography crowd with dual cameras. Both devices are high quality, well-built, and a delight to use. Let’s look at just what these two devices have in common, if anything, and then we will take a closer look at each one in hopes that we can determine a winner of this comparison.

The LG V20 and the Huawei Mate 9 have a few things in common. The display on the Mate 9 is only 0.2-inches larger, and the physical size is not very different, but the Mate 9 does weigh in at 16 grams more than the LG V20. The displays use the same LCD technology but different resolutions. They both use a different processor and GPU, although in the same league, and they both pack 4GB of DDR4 RAM, both have a 64GB memory option, and both have the means to expand their memory via a microSD card. The primary camera areas are different, yet the same – the LG V20 uses one 16MP sensor and one 8MP sensor, while the Mate 9 uses a 20MP and a 12MP sensor – but both deliver great photos. Both have a fingerprint sensor for unlocking your device as well as authorizing mobile payments. They both come with the usual suspects – WiFi, Bluetooth v4.2, GPS, NFC, and both use the newer Type-C reversible port for charging and data transfer.

The LG V20 with its aircraft quality aluminum has a smoother and more elegant look than its predecessor, the LG V10 which was chiseled out of a block of stainless steel. There is no more silicone backing, but there are two silicone-like bumpers on the top and bottom of the LG V20. The V20 retained the dual display for notifications, although LG increased the brightness of the secondary screen. The LG V20 audience is those interested in experimenting with photography or that want a device with a great sound through earphones.

LG decided to use two displays rather than using the ‘always-on’ technology. There is a primary IPS Quantum QHD display that measures 5.7-inches with a resolution of 2560 x 1440 pixels and 513 pixels-per-inch (PPI) and a new and brighter secondary display that is a 1040 x 160-pixel display that is also 513 PPI. The secondary display will help save the battery by allowing the primary display to stay off while only the smaller display stays on and feeds your notifications such as time and date. The LG V20 uses a Snapdragon 820 quad-core processor with dual cores running at 1.6GHz and dual cores running at 2.15GHz. The LG V20 packs 4GB of DDR4 RAM and 64GB of faster UFS 2.0 internal storage with room to expand.

The LG V20 uses a dual camera arrangement for the photography lovers and packs a 16MP primary sensor and another 8MP wide-angle lens that operates independently from the main camera. For routine shots, the V20 will use the 16MP, but for those shots that need a wider view, the 8MP wide-angle can step in. LG included both laser and phase detection autofocus (PDAF,) added a large f/1.8 aperture on the primary camera and f/2.4 for the 8MP sensor, OIS, and a dual-tone LED flash. LG included a single 5MP for the front-facing camera (FFC) with a f/1.9 aperture for selfies or video chatting. The LG V20 packs a 3200mAh removable battery that should last you throughout the day. The user has the option of using Quick Charge 3.0 for a fast charge, or you can just replace it with a new battery.

To offer great sound, LG went all out on the V20 with four DACs (Digital-to-Analog Converters), which is a first in a smartphone. LG also provided an EQ with left/right balance controls that are B&O Play certified. A good set of earphones will allow you to appreciate the work that LG put into the V20, but it is a shame LG forgot to add dual front-facing speakers to take advantage of technology. Its rugged build earned the LG V20 an MIL-STD-810G certification. The V20 measures 159.7 x 78.1 x 7.6mm and weighs in at 174 grams and cost about $670. The LG V20 is available in the colors Titan and Silver. The LG V20 is running Android 7.0 Nougat out-of-the-box. 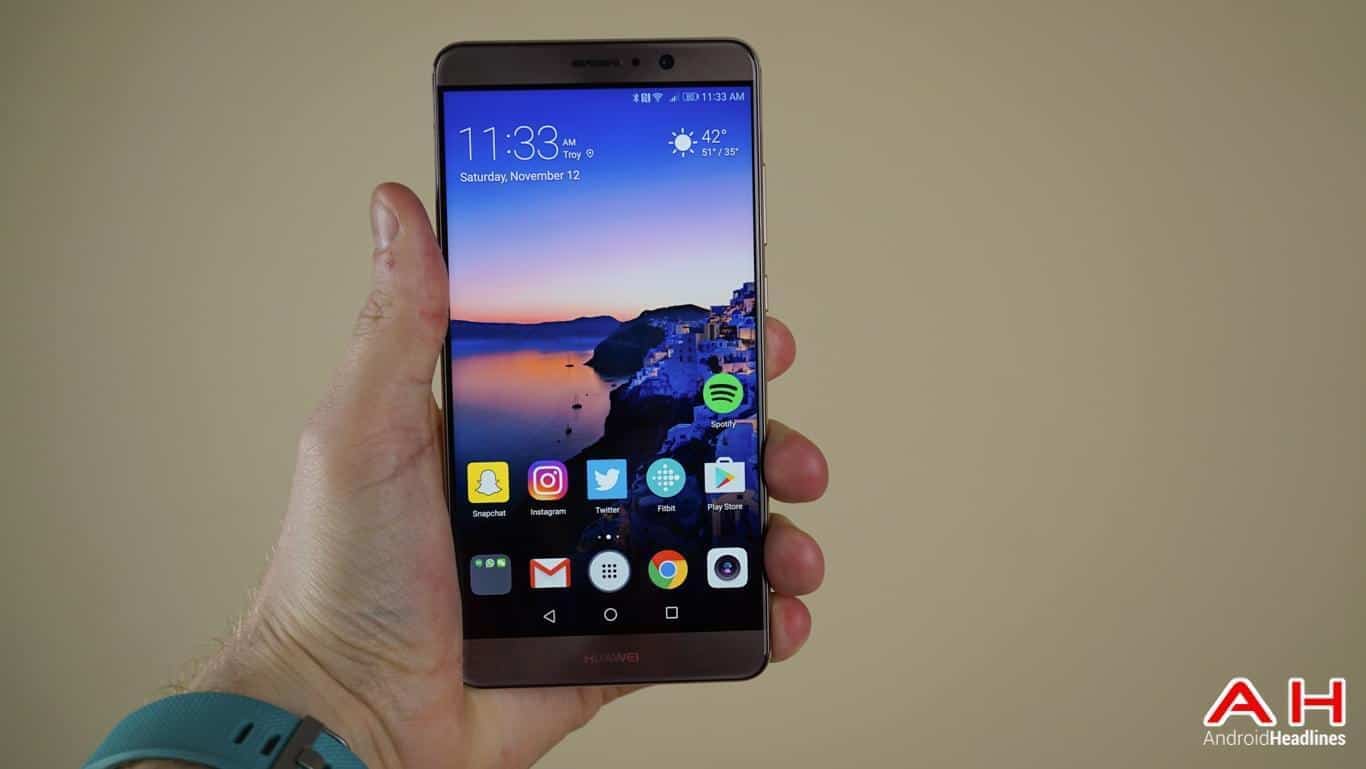 Huawei loves big screens on their smartphones and would rather sacrifice resolution over the size. The Huawei Mate 9 is the newest in this lineup of larger smartphones, although Huawei was able to keep the Mate 9 relatively compact in physical size with its large 5.9-inch display by using small bezels. There is an official US version on its way later this year. The Mate 9 comes with a Full HD LCD display resolution and a screen this large would benefit from a higher resolution. Huawei believes a Quad HD display is unnecessary, and it is on a small screen, but an almost 6-inch display benefits from a higher resolution. It has a solid build to it and with its slightly curved edges feels great in hand. Let’s see just how it stacks up to the LG V20.

The Huawei Mate 9 sports a large 5.9-inch IPS LCD FHD display with a resolution of 1920 x 1080 pixels and only 373 PPI due to its also tablet size screen. It uses a powerful 64-bit Hisilicon Kirin 960 octa-core processor with four cores running at 1.8GHz and four cores running at 2.4GHz. It packs 4GB of RAM and 64GB of expandable internal memory. To handle the graphics, an outstanding performer, the Mail-G71 MP8 GPU is used.

Huawei used dual Leica optics for the primary camera with a 20MP sensor for colored photos and a 12MP sensor that shoots strictly monochrome (B&W) photos. The aperture of f/2.2 is rather small but added OIS, 2X zoom, both Phase Detection Autofocus (FDAF) and laser autofocus, and a dual-tone LED flash, that work together to give you great pictures. This setup gives photographers the ability to experiment with some great B&W shots. The Mate 9 uses a large 8MP sensor on its FFC with a f/1.9 aperture and 26mm wide-angle lens for great selfies and video chatting. The Mate 9 comes with a large, non-removable 4000mAh battery with Huawei’s own SuperCharge that will charge your battery from 0-100-percent in only 90 minutes with the provided charger.

The Mate 9 is a beautiful looking smartphone with many good qualities, but like any smartphone, it comes with a wish list. Adding Quad HD resolution is a good start, and while it has stereo speakers with one set mounted on the bottom of the phone, the second speaker is the earpiece, it’s a shame Huawei did not add any Hi-Fi circuitry. It is also disappointing a device in this price range has no dust or water protection. The Mate 9 has a rear-facing fingerprint sensor to unlock the device or authorize mobile payments, and the Mate 9 is running Android 7.0 Nougat out of the box. The Mate 9 measures 156.9 x 78.9 x 7.9mm, weighs in at 190 grams and comes in Space Gray, Moonlight Silver, Champagne Gold, Mocha Brown, Ceramic White, and Black. Its pricing should be somewhere in the $600 range. 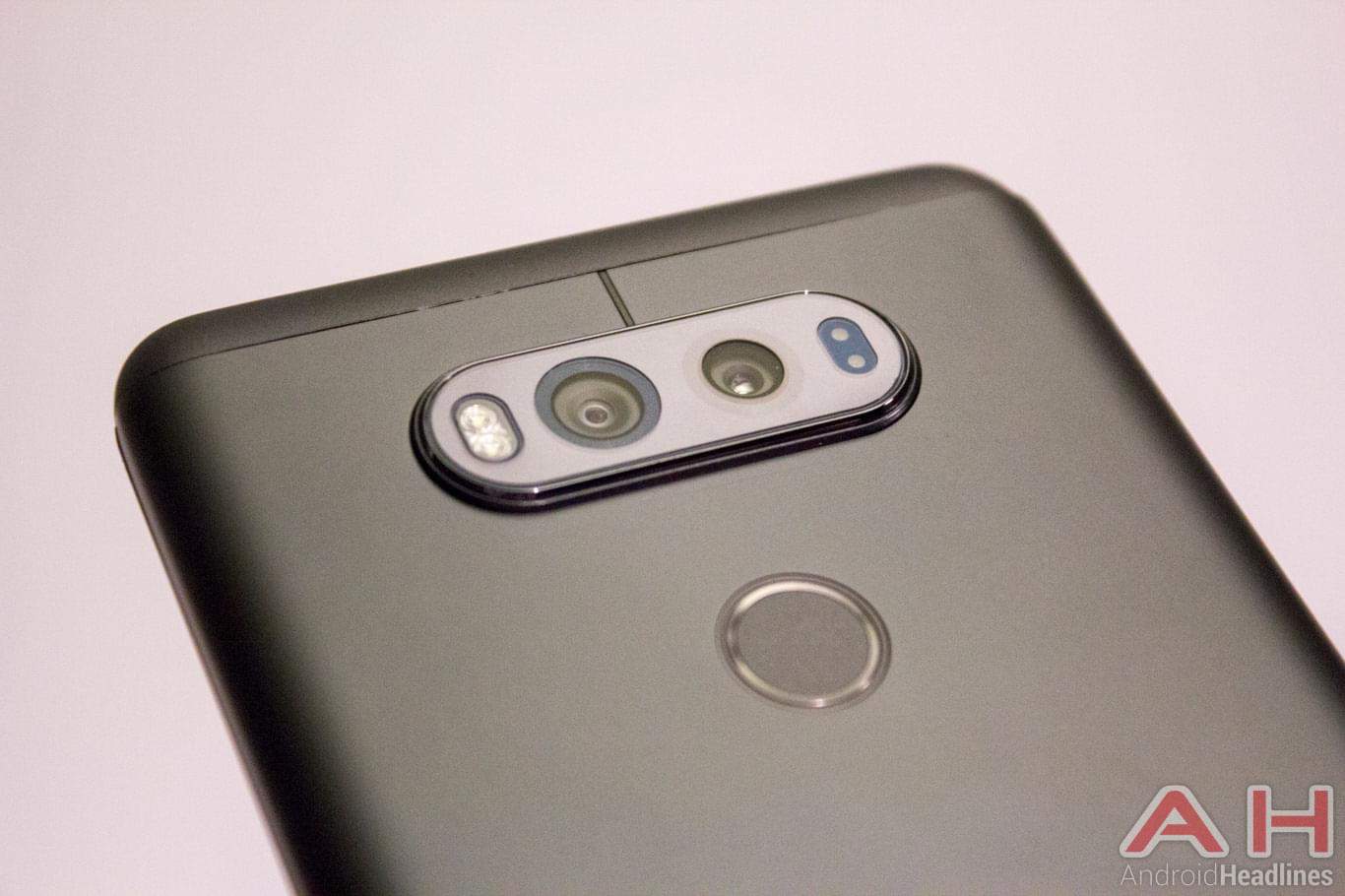 Honestly, this was a tough selection – both devices are very evenly matched in specifications and price bracket – but I am picking the LG V20 because of its Quad HD display, secondary display for notifications, excellent sound, and its removable battery.

The Huawei Mate 9 has a slightly larger display, but only Full HD resolution, it sports dual cameras as well and is running Android Nougat making it a smartphone to consider.

With pricing and features so close, it comes down personal preference and availability. The LG V20’s secondary display and sound advantages are what caught my eye, and I am still declaring it the winner of this comparison.