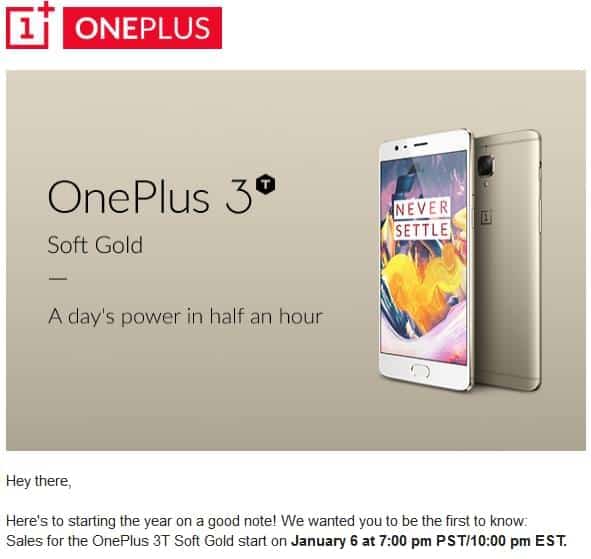 OnePlus has just confirmed that the Soft Gold variant of the OnePlus 3T will become available on January 6th. OnePlus had introduced two color variants of their OnePlus 3T flagship, the Gunmetal and Soft Gold models. The Gunmetal OnePlus 3T (both 64GB and 128GB storage variants) has been available through the company's official website, and the Soft Gold variant was not, but it will be on January 6th, as the company has started sending out e-mails to consumers who wanted to be notified when the device is about to become available.

The OnePlus 3T features a 5.5-inch fullHD Optic AMOLED display, 6GB of RAM and 64GB / 128GB of internal storage. The device is fueled by the Snapdragon 821 64-bit quad-core processor, and a 3,400mAh battery is also included in the package, and is not removable. Speaking of which, OnePlus' Dash Charge quick charging is also a part of the offering, while the phone sports a 16-megapixel camera both on its front and back sides. The OnePlus 3T is made entirely out of metal, and comes with OnePlus' OxygenOS skin which is placed on top of Android. We've already reviewed the OnePlus 3T, so if you'd like to get more info before you buy the device and get ready for the launch of the Soft Gold variant, click here.