As readers should be aware of, over the past few weeks Samsung has been preparing a refreshed Galaxy J series for the year 2017, including the new Samsung Galaxy J3 (2017). Furthermore, a so-called Samsung Galaxy J3 Emerge was planned for a market release in the United States through Sprint and Virgin Mobile on January 6, and while the smartphone is nowhere to be seen on the carriers’ online stores at the time of writing, once again the Galaxy J3 Emerge was running Android 6.0 Marshmallow as opposed to Google’s latest mobile OS version. However, interestingly enough, the new Samsung Galaxy J3 model certified by the Wi-Fi Alliance does run Android 7.0 Marshmallow out of the box, and it may be a coincidence, but the handset has been certified on the same day the Samsung Galaxy J3 Emerge was planned for a release via Sprint and Virgin Mobile: January 6. In any case, the model spotted in the Wi-Fi Alliance database carries model number “SM-J327A”, which may suggest that the variant at hand is meant to hit the shelves in the United States via AT&T. This is due to the fact that Samsung’s smartphones designed for US carriers are usually identified by letters “A” for AT&T, “V” for Verizon Wireless, “T” for T-Mobile, “P” for Sprint and so on. As an example, the Samsung Galaxy S7 launched in the United States through AT&T carries model number “G930A”, whereas the same device for the Sprint network is identified by model number “G930P” – same model number with a different letter at the end.

Regardless of whether or not the Samsung Galaxy J3 SM-J327A is destined for AT&T, spec-wise the regular Galaxy J3 (2017) carries a 5-inch Super AMOLED display with a resolution of 720 x 1280, a Qualcomm MSM8937 Snapdragon 430 SoC (System-on-Chip), an Adreno 505 graphics chip and 2 GB of RAM. It also sports an 8-megapixel camera on the back panel, whereas the so-called Samsung Galaxy J3 Emerge makes use of a 5-megapixel unit instead. Needless to say, it’s very likely that the SM-J327A now certified by the Wi-Fi Alliance will carry similar hardware components aside from a newer version of Android OS. 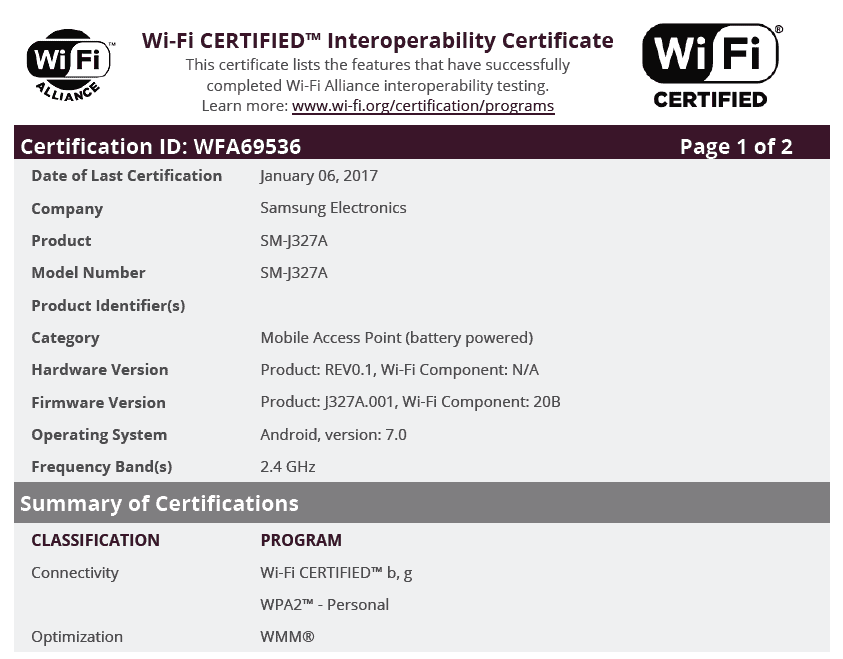