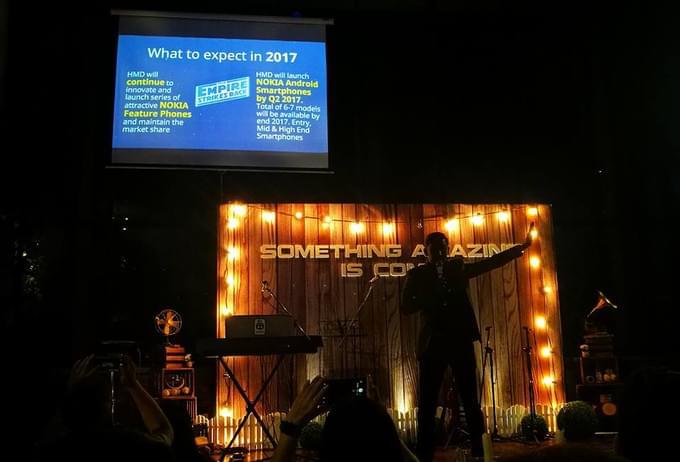 It's not exactly a secret that Nokia is making a comeback with some help from HMD Global (the company purchased Nokia branding rights from Microsoft), and according to a new leak, the company will announce up to 7 Android-powered smartphones in 2017. If you take a look at the provided image, you'll notice a slide on a screen in the upper left corner which more or less confirms that we'll see 6-7 Nokia-branded smartphones released this year. The slide also mentions HMD Global, and says that the aforementioned smartphones will be low, mid and high-end Android phones.

Now, you're probably wondering where was this image taken. Well, it's not just a random leak like the ones we're usually seeing, this image was taken at a recent presentation held by Avaxx. For those of you who don't know, Avaxx is an authorized Nokia / Microsoft distributor in Malaysia, so this info is quite reliable. Now, most of you have probably already seen a number of Nokia D1C leaks thus far, which is the company's allegedly upcoming smartphone which had been mentioned in a ton of leaks and rumors thus far. This is, allegedly, Nokia's mid-range smartphone which will sport a fullHD (1920 x 1080) display, and ship with Android 7.0 Nougat out of the box. Speaking of its software, HMD Global already confirmed that they intend on sticking to stock Android, rather than creating their very own ecosystem on top of Android, which suggests that we'll get an almost stock build of Android on Nokia-branded phones, but you can expect a couple of apps to be installed by the company, though, of course.

Some of you are probably wondering when can we expect Nokia-branded smartphones to hit the market, well, it seems like HMD Global is getting ready to unveil first Nokia devices, or at least one device, at the Mobile World Congress (MWC) in Barcelona which will kick off at the end of February. The Nokia D1C will probably be announced at the tradeshow, though nothing has been confirmed just yet. Chances are we'll see a ton of new leaks before the end of next month, so stay tuned, we'll keep you posted.