Nokia confirmed that it’s working on an Android phone equipped with the Qualcomm Snapdragon 835 system-on-chip. While replying to a user on a Chinese microblogging website Weibo, the Chinese division of Nokia said that a device powered by Qualcomm’s latest flagship SoC is already in the works and implied that it’ll be hitting the market at some point in 2017. While the company didn’t specifically state it’s talking about a high-end Android device, the fact that it mentioned the Snapdragon 835 certainly suggests that. The HMD Global-owned phone maker previously confirmed it will be announcing new Android devices at Mobile World Congress 2017 in Barcelona, meaning that more info on the Snapdragon 835-equipped Nokia smartphone will possibly follow in late February.

Nokia’s marketing team wrote that they understand how their fans are eager to hear more news about new high-end devices, but asked them for patience as the firm apparently needs “some time to prepare” their announcement of a phone fueled by the Snapdragon 835. While replying to another post on Weibo, the Chinese division of Nokia also told users to stay tuned for more news regarding Nokia-made Windows devices. This is the first time the company mentioned the possibility of making another Windows device since Microsoft sold it to the Foxconn-owned HMD Global last year. Still, it remains to be seen whether that statement will amount to anything seeing how the firm has so far only confirmed a lineup of Android phones in 2017.

The Finnish company recently launched the Nokia 6 in China and is expected to soon start debuting more Android phones spanning from low-end to flagship tiers. The mentioned Snapdragon 835-equipped phone is likely the Nokia P1 that has already been rumored about for a few months. That device is said to ship with 6GB of RAM, a Carl Zeiss-certified 22.6-megapixel rear lens, and a 3500mAh battery. The Nokia P1 will reportedly run Android 7.0 Nougat out of the box and launch in two variants sporting 128GB and 256GB of internal storage, respectively. Other rumors suggest that the two variants of the Nokia P1 will also differ in screen size, with the larger version boasting a 5.5-inch AMOLED display. More information is likely going to follow by late February when MWC is scheduled to take place. 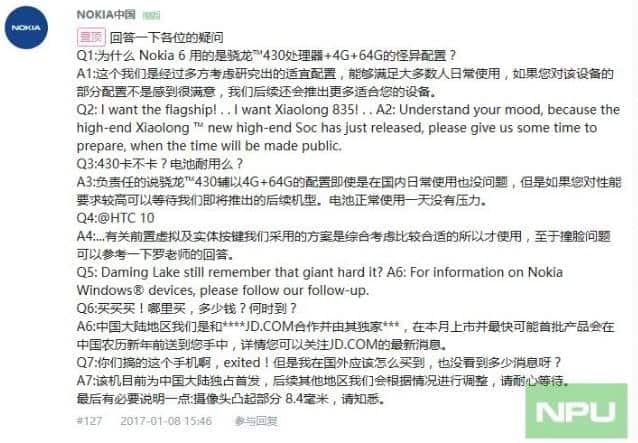