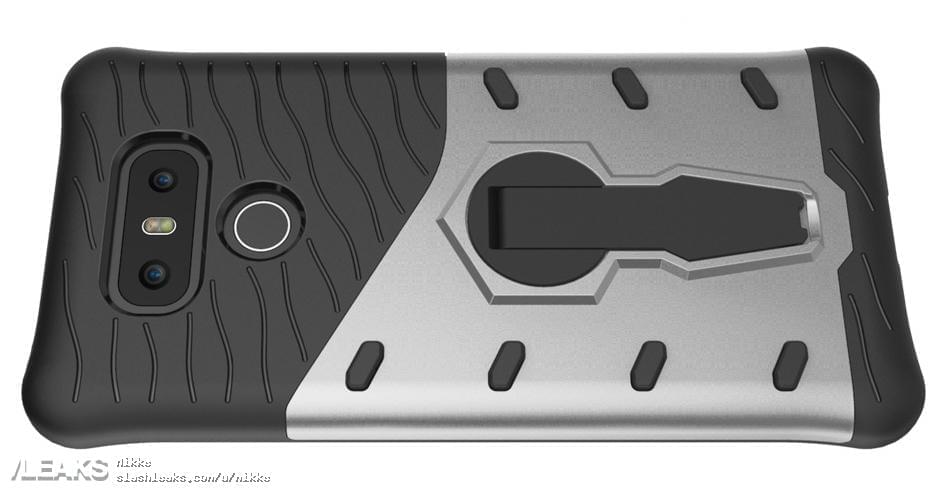 Renders that are supposedly based on CAD files from the production lines for upcoming devices and don't come directly from the company can't always be completely trusted, but when images of the device leak out from other sources and seem to corroborate the earlier renders, it adds a bit more credence, and that is exactly what has now happened with the LG G6. This latest image shows the back of the phone in a case, complete with the same dual horizontal cameras and circular fingerprint reader and power button seen on the earlier renders. The overall design seems the same, though we don't get a very good look at the device in this picture.

The phone on show here has a flash set between two horizontally laid out cameras, along with a round fingerprint sensor down below, bearing a chrome ring. The whole design is fairly squarish, and apes the LG G5 and LG V20 quite nicely. The leaked render showed a device that was essentially the LG G5 without the modularity, just a bit more premium and with a few features copied from the LG V20, such as the way that the dual cameras are set up. Some sources had claimed that a removable battery is on board, but previous renders have not made it clear just how the battery cover will come off.

On the spec side of things, the LG G6 is supposed to be one of the first phones to be powered by Qualcomm's upcoming Snapdragon 835 processor. The screen, meanwhile, will reportedly be a very VR-friendly display thanks to a 2,560 x 1,440 AMOLED unit which spans 5.3-inches – which should result in an excellent pixel density. In addition, the phone is said to contain a single USB Type-C port and no 3.5-millimeter headphone jack. Adding to the trend away from the headphone jack from a number of the major manufacturers. Although, like all of the other information that has come through on the LG G6 thus far, it should be taken with a grain of salt as LG has yet to put out much of anything official about the device.