Earlier in October 2016, LeEco officially introduced the Le S3 smartphone equipped with a dual camera setup on the back panel, and now, according to a recent leak accompanied by a photo and a list of specifications, LeEco is preparing for the release of yet another dual camera smartphone. The device was spotted in an online store where it carries the "LeEco Le 2S Dual" moniker and a price tag of only 1,000 Chinese Yuan (roughly $144).

By the looks of it, the mysterious LeEco Le 2S Dual shares its overall design with the aforementioned LeEco Le S3, featuring a back-fitted fingerprint sensor and a dual camera setup coupled with an LED flash. However, according to the online store listing, the LeEco Le 2S Dual will be powered by a Helio X25 system-on-chip (SoC) featuring a total of 10 CPU cores (Cortex-A72 and Cortex-A53) and a Mali-T880 MP4 graphics chip. The source also mentions that the smartphone sports a 5.5-inch display with an undisclosed resolution, and offers two 13-megapixel rear-facing cameras along with a 12-megapixel front-facing sensor. Other hardware details remain unknown for the moment, but it's worth noting that the smartphone has been identified as carrying model number "LEX659", and the sticker on the back panel (image below) seems to confirm this. The source also confirms that, indeed, the LeEco Le 2S Dual will share "the same antenna design" as the LeEco Le 2S, with the exception that the new mysterious model will feature a different color.

As for the smartphone's release, availability details are unknown but seeing how the aforementioned online store already posted a photo, specifications, and a price tag, it's possible that the so-called LeEco Le 2S Dual might be just around the corner. In any case, the source does mention that the LeEco Le 2S Dual will have a price tag of 1,000 Yuan, which translates to roughly $144. This seems to be a competitive price tag which could divert the attention of prospective smartphone buyers away from budget-friendly manufacturers such as Xiaomi, and more towards LeEco. However, as far as availability is concerned, it remains to be seen if LeEco has any plans to launch the mysterious device outside of China, especially since last month the company halted expansions and offline sales in India due to low market performance. Either way, the smartphone is not yet official and as always, unconfirmed details remain subject to change. 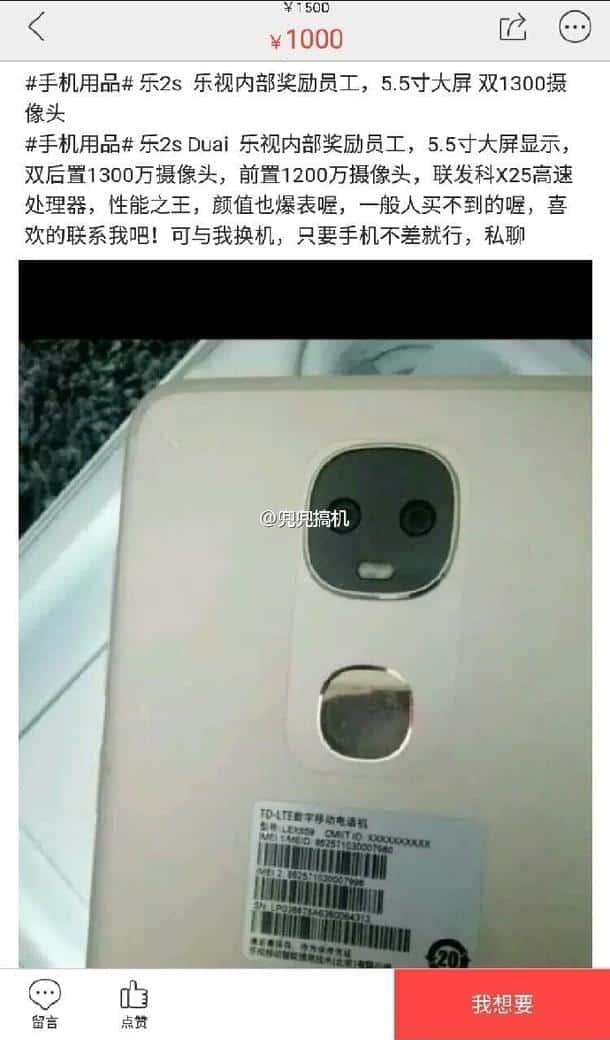