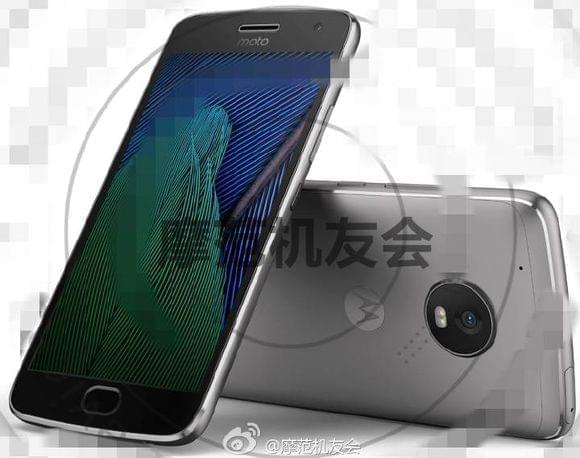 A seemingly official render of the silver variant of the Moto G5 Plus recently appeared on the Chinese microblogging website Sina Weibo. A series of related leaks and rumors also suggests that the Lenovo-owned Motorola is now preparing to release the successor to the Moto G4 Plus as the smartphone is said to be unveiled in March.

The smartphone depicted in the leaked render above looks similar to the Moto G5 Plus prototype seen in a number of leaked hands-on photos earlier this week. It features a metallic frame with a traditional SIM and a microSD card slot at the top, a physical home button – presumably with a fingerprint scanner embedded within – and a relatively large camera bump on the back panel. According to the source, the smartphone sports a 5.5-inch display with a resolution of 1920 by 1080 pixels, and is powered by the Qualcomm MSM8953 Snapdragon 625 System-on-Chip (SoC) housing eight Cortex-A53 cores clocked at 2.0GHz, as well as the Adreno 506 graphics chip. The Moto G5 Plus is also rumored to accommodate 4GB of RAM along with 32GB of internal storage, while its components will be powered by a 3,080mAh battery. The back panel carries a 13-megapixel main camera coupled with a dual-LED flash, while a 5-megapixel sensor resides on the opposite side. Last but not least, the Moto G5 Plus is said to run Android 7.0 Nougat out of the box, and knowing Motorola's usual way of doing things, the operating system will likely be very close to stock Android. Yes, Motorola is now owned by Lenovo, but the Chinese tech giant seemingly isn't getting in the way of Motorola's approach to device manufacturing.

The Moto G5 Plus will reportedly hit the shelves in two color options, Silver and Gold, but the latter has yet to be revealed through unofficial channels or otherwise. In any case, the Motorola Moto G series made a name for itself by offering a good balance of performance, features, and affordable pricing, and while pricing details for the upcoming model are still unknown, the Moto G5 Plus is expected to follow in the footsteps of its predecessors.