Lenovo and Motorola have just teased a device announcement for Mobile World Congress next month, as they have just sent out an invite of sorts telling press to “save the date” for their upcoming press conference that is set to happen on February 26th. Although they don’t give much detail in the way of words, they do mention that it will be happening at 4:30PM local time in Barcelona, and those minor time and date details do come along with a picture that shows off the a rendered image of a smartphone so it’s likely that they will have a phone to show off at the event.

This isn’t a direct confirmation, but it might as well be as this is about as close to a confirmation as it will get until Lenovo actually unveils something next month. Since the Moto Z family is still fairly new it’s a safe bet that what Lenovo and the Moto team have to show off will have nothing to do with this particular device series. Mobile World Congress is close to the time frame that the Moto G4 family of devices was shown off last year, though, so it’s entirely possible that the Moto G5 series of devices will be making their official appearance.

Considering the timing of last year’s Moto G4, G4 Plus, and G4 Play, as well as the recent G5 Plus leaks that surfaced with images at the beginning of this week, there is little else that Lenovo could have in store when it comes to hardware announcements. Of course, it is always possible that they will have stuff other than phones to show off, such as a potential new Bluetooth headset of some kind, but it’s highly unlikely that the press conference won’t include any phone announcements at all. This coupled with a recent rumor that the Moto G5 Plus is set to launch in India in March makes it hard to dismiss that the public will get their first official look at the series of Moto G5 devices at the end of next month, although if the design and hardware specifications are exactly like the rumors and leaks then mostly everything is already known in terms of what to expect. 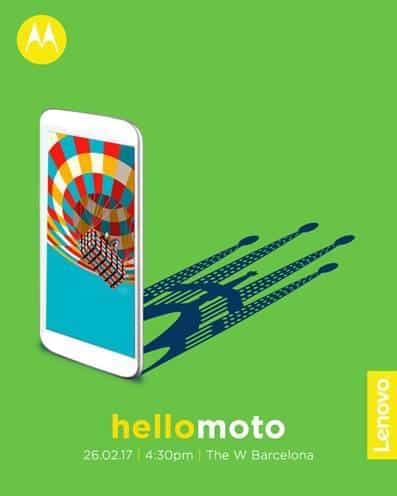