The upcoming Galaxy S8 and Galaxy S8 Plus smartphones will reportedly come with model numbers SM-G9500 and SM-G9550. That’s according to a new post on Twitter by @mmddj_china, who also says that there will be no Galaxy S8 Edge this year to replace last year’s Galaxy S7 Edge. Instead, there will be the Galaxy S8 Plus, which will apparently feature a massive 6-inch display. For context, Samsung’s current flagships, the Galaxy S7 and Galaxy S7 Edge, come with model numbers SM-G930 and SM-G935. One would have naturally expected their successors to sport model numbers SM-G940 and SM-G945, but now that this new info has been posted online, some speculations seem to suggest that Samsung may be looking to circumvent the 940/945 numbering scheme to avoid having ‘4’ in the model number of its upcoming premium flagship.

While Samsung is not expected to make any official comment either confirming or denying these rumors, media outlets and online commentators seem to have their own theories about the issue. Apparently, there's a lot of similarity in the way the words ‘4’ and 'death' are pronounced in Chinese as well as in Korean. Which is why, the number itself is considered inauspicious and unlucky in both these cultures, and is often avoided in various different industries. Now whether these leaked model numbers are indeed authentic and Samsung will actually change things around to avoid the number '4' remains to be seen. Although, at the moment, this is the current information coming through.

Meanwhile, with the fire-prone Galaxy Note 7 now permanently withdrawn from the market, Samsung’s smartphone ambitions depends heavily on the upcoming Galaxy S8 and its variants. Recent reports have suggested that the device will very likely launch in April, although, confusion continues to persist on the exact launch date. The latest report on the issue seem to suggest April 15 as the day, although some earlier rumors had suggested otherwise. It remains to be seen when the device will be finally available for purchase, but if even some of the rumored hardware specs and software features do hold up, it will certainly be a smartphone to watch out for. 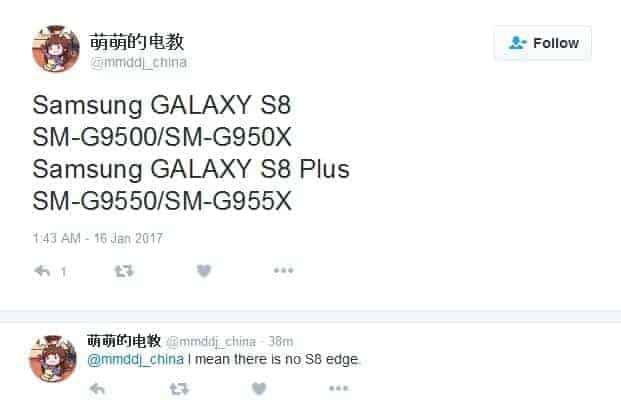