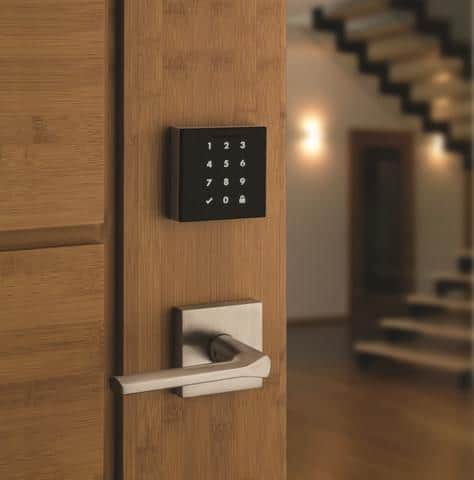 Just about every smart lock system out there has a traditional keyhole and cylinder mechanism as a fallback, in case the lock's smarts should fail or be compromised for whatever reason, but it looks like Kwikset is the first to buck the trend with their new Obsidian smart lock. The kicker for the Obsidian is that its keyless design enables it to keep a low profile. It's the first compact smart lock on the market, which enables it to be used in a wider variety of use cases, though it is also certainly worth a mention that it's one of the first smart locks to use the tailor-made Z-Wave 500 chipset, which enables hyper-secure encryption, along with long wireless range.

Kwikset's new Obsidian smart lock uses a touch-sensitive panel with a keypad. While a setup like this may normally be susceptible to cracking by looking for wear or smudging on the keys, Kwikset beats this security liability by illuminating two random keys with each use. A user has to press the two random keys in order to light up the entire keypad, allowing them to punch in their lock code. If you would like to avoid using the keypad altogether, of course, there is an option for that; the Kwikset Obsidian will come in two variants, one of which can be paired up to a smartphone and other IoT devices in your home.

Thanks to the Z-Wave protocol, Kwikset's Obsidian can integrate with a wide variety of smart home hubs and setups, as well as other IoT devices in a home. The wide wireless range provided by the Z-Wave 500 processor at the core of the whole operation means that you'll be able to integrate the Obsidian with your smart home regardless of what room your smart home hub may reside in, or even if your smart home hub is actually your smartphone. The variant that comes without Z-Wave and smartphone link capabilities will cost $179, while the somewhat smarter version will run you $229. Like many things being shown off at CES, both versions of the Kwikset Obsidian will be available sometime in Spring of this year.