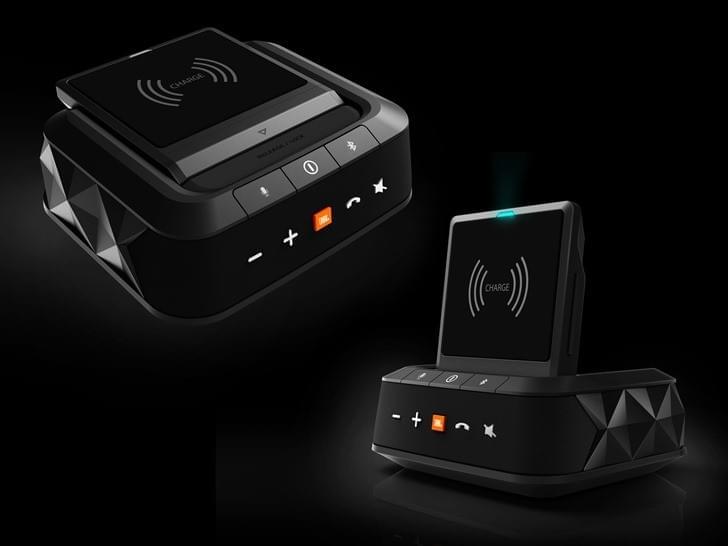 JBL has just unveiled an enhanced car dock with wireless charging capabilities at CES, but it's more than just a car dock and it's more than just a wireless charger. JBL's 'Smartbase' as it's called wraps a collective of useful features into one unit that lets drivers have access to their smartphone in a way that is less cumbersome and arguably safer than simply handling the device like you would any other time during the day. The Smartbase features a foldable wireless charging pad that lays flat when not in use, or when you don't need to use the device, and the pad folds up to point the phone's display forward should you need to interact with the screen for things like glancing at the navigation directions.

JBL typically releases devices that are centered around audio, and they're well-know for producing some pretty high-quality speakers and headphones, so it might seem a bit weird that they're venturing into the vehicle space with a car dock accessory. As mentioned above though, this is more than a car dock that charges your phone wirelessly. It also has built-in speakers and can be used for taking voice calls, and therein lies the audio portion of this device and JBL's expertise.

There are easy access controls for the volume as well as for muting the audio and initiating or answering a phone call, and of course your Bluetooth pairing button as well as the power button are just above the audio management buttons. Aside from charging and holding your phone and serving as a means for a voice call speakerphone, the Smartbase has Google Now integration which allows the driver to initiate voice controlled commands that work with Google Now as they would on just the device. As of right now there isn't an exact date yet for the launch, but JBL does mention that this will be available sometime this coming March, and it will cost $199 at retail when it is available for purchase officially, or $150 for a version that has no wireless charging pad included. Additionally, through the pairing of a companion app the JBL Smartbase can also alert the driver if they start drifting out of their lane, and it can even enable the rear camera to act as a dashcam. If you're the type to use your phone while driving, this might be an accessory worth considering.