Huawei is seemingly working on a new tablet which appears to be a new entry in the MediaPad lineup. Judging by a screenshot shared by Roland Quandt of WinFuture on Twitter a few days ago, the product is identified as the Huawei MediaPad T3 and carries model number "KOB-L09" in the Wi-Fi Alliance database. Furthermore, the source believes that it's "a safe bet" for the Huawei MediaPad T3 to be introduced at Mobile World Congress 2017 in Barcelona, Spain.

CES 2017 in Las Vegas came and went earlier in January, and technology enthusiasts are now looking forward to a new consumer electronics event to take place in Barcelona, Spain. We're referring of course to MWC 2017 (Mobile World Congress) which will open its doors to the public between February 27 and the 2nd of March. Now, according to the latest bits of information passed along via Twitter by WinFuture's Roland Quandt, Huawei is preparing to unveil the Huawei MediaPad T3 at MWC 2017. As shown in the screenshot below, apparently the device has already been certified by the Wi-Fi Alliance on January 11, 2017, and the product is powered by an unspecified version of Android OS. Other specifications remain unknown so it remains to be seen whether or not Huawei intends to release multiple tablets as part of a single series, similar to how they introduced several Huawei MediaPad T2 tablets last year. As a frame of reference, the Huawei MediaPad T2 launched in 2016 came in three main variants; namely the Huawei MediaPad T2 7.0, the MediaPad T2 7.0 Pro, and the MediaPad T2 10.0 Pro, with screen sizes evidently ranging from 7-inches to 10-inches in diagonal. But while the non-Pro variant was carrying lower hardware specifications, it was launched with Android 6.0 Marshmallow out of the box, whereas the beefier Pro models hit the shelves running Android 5.1 Lollipop.

In closing, if the rumors are correct and the Huawei MediaPad T3 "KOB-L09" will be introduced at MWC 2017 in Barcelona next month, it's possible that the Chinese tech giant will have more than one model to show to the public. Either way, more details are bound to emerge ahead of MWC 2017 through official channels or otherwise. 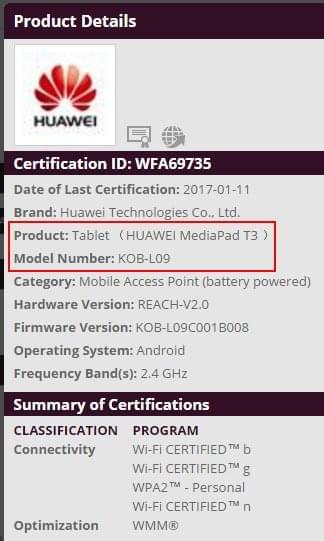