Skip to content
Advertisement
Trusted By Millions
Independent, Expert Android News You Can Trust, Since 2010
Publishing More Android Than Anyone Else
11
Today
11
This Week
12
This Month
2725
This Year
112792
All Time
Advertisement The Android Nougat update for the HTC 10 in Europe has been temporarily paused, according to a tweet by the Product and Service Director for HTC EMEA, Mr. Graham Wheeler. The decision to halt the process, however, will affect users only in mainland Europe, with the rollout already completed as planned in the U.K., Russia, the Middle East and Turkey. HTC had resumed its Android 7.0 Nougat rollout to its latest flagship throughout Europe, the Middle East and Turkey just a couple of days ago after initially halting the process earlier this month apparently because of some persistent bugs in the new firmware. Although Mr. Wheeler did not reveal the exact reason for the decision this time around, he did mention a ‘technical reason’ that he says HTC will be working on in the coming days. If everything goes according to plan from here on in, the update is now expected to go live again next month.

HTC is one of the many smartphone vendors that have been rolling out Android Nougat to their premium devices over the past few weeks. The company promises to update most of its smartphones for a period of up to two years after their release. That being the case, many devices from the Taiwanese company are expected to receive the latest major version of Android in the coming weeks, including its current flagship, the HTC 10, as well as its immediate predecessor, the One M9. The unlocked One A9 also started receiving Android Nougat earlier this month, according to a tweet from the VP of Product Management for HTC USA, Mr. Mo Versi. Meanwhile, the recently-launched HTC 10 Evo (Bolt) already ships with Android 7.0 Nougat out of the box, although, it’s not known whether the company plans on rolling out Android 7.1 to the device at some stage in the future.

HTC 10 is the current flagship smartphone from the Taiwanese company, and is expected to be replaced by the HTC 11 later this year. Unfortunately, though, recent reports suggest that the device won’t be unveiled at the MWC trade show next month, because Samsung has apparently called dibs on the initial supply of Snapdragon 835 chips that are expected to power the upcoming flagships from both the companies. In fact, LG Electronics is also in a similar situation, and is now reportedly planning to use the last-generation Snapdragon 821 in its upcoming LG G6 rather than waiting too long for the Snapdragon 835 supply constraints to ease. 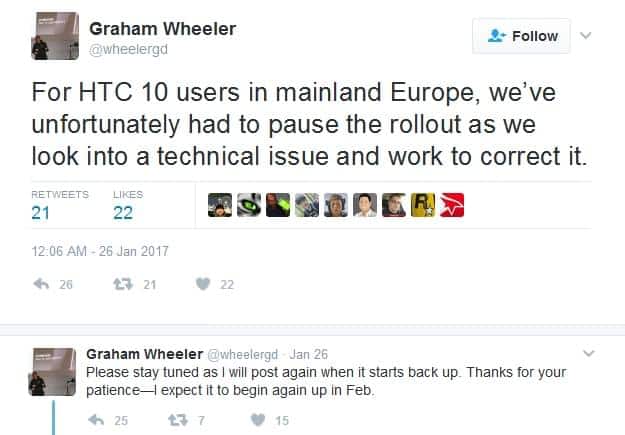