Honor USA has tweeted that a new “epic” Honor smartphone is to be unveiled at the Consumer Electronics Show, or CES, which kicks off in a few days. Honor also added the “#doubleornothing” and “#forthebrave” hashtags and asked readers if they were ready. At this juncture, Honor have added no additional detail about the device, such as the likely specification or cost, but there have been rumors that this could be a variant of the Honor Magic, which was released into the Chinese market at the end of 2016. Unfortunately, at this time all that’s known is that the new device will be announced in the next few days and will be available in the North American markets. Although it is difficult to know what to read into the two hashtags, perhaps these imply that the new device has a double rear camera set up. The image Honor are using for their Twitter profile also suggests this too. Honor currently sell two devices into the North American direct to customer, unlocked market: the Honor 5X and Honor 8. Both are relatively inexpensive devices and we would hope that whatever the Chinese company is set to reveal in a few days would also follow this trend.

If Honor are releasing either the Honor Magic, or a relative of this device, it would be interesting device for the American market. The Honor Magic features a dual camera setup and dual curved glass display. This device is based around the HiSilicon Kirin 940 chipset, backed up by 4 GB of RAM and has 64 GB of internal storage. There’s a 5.1-inch, QHD AMOLED display panel, dual SIM slots, dual 12MP rear cameras and a 2,900 mAh battery.

In short, the Honor Magic is arguably a current generation flagship device model, but the device may well be eclipsed in a few months when some of the traditional smartphone brands, such as Samsung, release their 2017 flagship models. Nevertheless, whatever Honor are set to release will almost certainly be significantly cheaper than Samsung’s next Galaxy S flagship device. there is only a couple short days before the CES 2017 show opens later this week where Honor will be announcing all the details of this new phone. 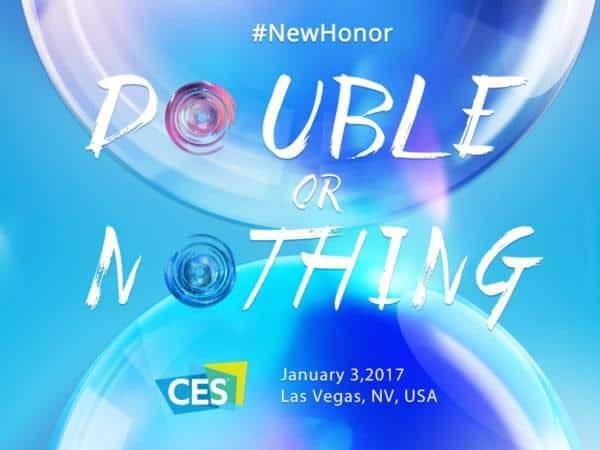