Google has extended its bonus referral scheme, whereby new and existing subscribers receive $20 credit on their Google Fi bill, until further notice. The referral scheme was originally set to run until January 11 but customers had noticed that the original page was still functioning. Google Support explained, “the Project Fi referral program date has been indefinitely increased due to huge response from the customers.” Although the company did not state an end date, the terms and conditions of the referral deal states the company may remove the scheme at any time. There are a number of other conditions, too: customers can share up to ten unique referral code, thus claiming a maximum of $200 in bill credits, and new signers must keep their Google Fi service for at least thirty days and pay two bills, notwithstanding that one month’s core voice and text service is essentially free.

Google’s Fi division is a MVNO (Mobile Virtual Network Operator) carrier offering a relatively simple to understand proposition. The service, which is officially available on a limited number of smartphones (the Google Nexus 6, Google Nexus 5X, Google Nexus 6P, Google Pixel and Google Pixel XL) and data-enabled tablets, offers customers an unlimited calling and text messaging plan for $20 a month. Data is a flat $10 per gigabyte. Google Fi is a mix of prepay and postpay: customers must pay a certain amount up front, but depending on the options established in their account, are able to exceed their prepaid data allowance. Customers can roam across many parts of the world for the same cost, although account holders must have a US-based Google account. In the US, the Fi service uses three carriers plus Wi-Fi networking, but the devices cooperate with carriers and Wi-Fi networks in a different way to most other service providers with roaming arrangements. Here, the supported devices will seek out the carrier with the strongest signal, picking between T-Mobile US, Sprint, US Cellular and a Wi-Fi network, whereas most carriers with a roaming arrangement will allow devices to roam to a different network when the primary network is unavailable. The Google Fi devices also use Google’s Wi-Fi Assistant, which can connect to a number of “high quality” open Wi-Fi networks around the world and establish a VPN connection to keep customer data safe from prying eyes.

Google Fi is an interesting project restricted by the number of officially compatible devices. The service will unofficially work on non-Nexus or Pixel devices, but without the network optimization and switching behaviour. The Google referral bonus scheme may be part of Google’s strategy to encourage more customers, especially those who are buying the Google Pixel or Google Pixel XL device unlocked, to try their service. 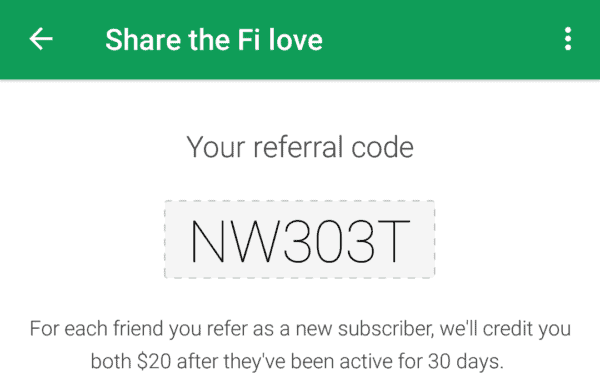