Lenovo’s unannounced Tab3 8 Plus likely appeared on Geekbench on Monday. The tablet bears the product number TB-8703F, and the listing reveals some underlying specifications of the device. The Tab3 8 Plus sports an 8.0-inch, 1080p display panel and is powered by an octa-core 2.02GHz system-on-chip which may be the Qualcomm Snapdragon 626 rather than a MediaTek chip used in the original Tab3 8. The Snapdragon 626 is built using a 14nm process size which offers less heat production and is more power efficient, in addition to offering a better performance than older chipsets built using larger processes. Additionally, this Snapdragon 626 is backed up by 3GB of RAM. The company is said to be offering the new Tab3 8 Plus in 32GB and 64GB variants, both of which will also allegedly ship with a microSD card slot. The new device is rumored to be powered by a 4,250mAh battery and will apparently run Android 6.0.1 Marshmallow out of the box.

Unfortunately, there’s still no word on when or where the Lenovo Tab3 8 Plus will be released, although the Barcelona-based Mobile World Congress kicks off next month and is a sensible opportunity for Lenovo to unveil its latest tablets. The company will likely release the device in both Wi-Fi and LTE variants seeing how the Qualcomm Snapdragon range of chipsets ships with native LTE support. Seeing how the Tab3 8 Plus sports contemporary hardware, the device should easily be capable of running Android Nougat and it’s reasonable to presume that Lenovo will be updating its software not long after releasing it.

The Lenovo Tab3 8 Plus was initially leaked back in June, and we have seen a small number of leaks since. All of these have always been keenly priced and reasonably successful devices. Lenovo’s new iteration does not appear to offer anything radically new, but instead continues to deliver a solid tablet experience, and the tablet is expected to offer good value. Over the years, Lenovo have produced a number of tablets including the YOGA family and the mid-range “Tab” models. It is still unknown when will Lenovo introduce this tablet or how much will it cost, but it is possible that the company is planning to reveal it during MWC 2017 which kicks off at the end of next month. 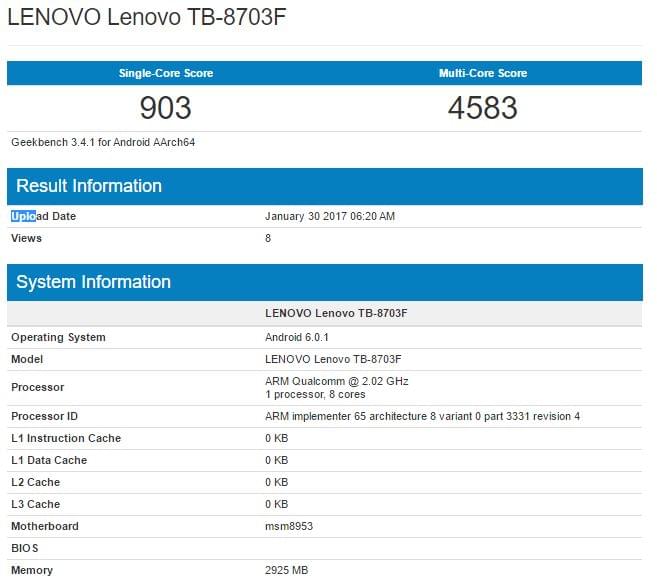