Following a number of rumors and leaks, the Samsung Galaxy C5 Pro just surfaced on GFXBench. The company’s upcoming smartphone was certified by TENAA (China’s equivalent to the FCC) a while back, while it also received its Wi-Fi certification from the WiFi Alliance. Well, the phone has also been benchmarked on GFXBench it seems, at least if this listing is to be believed. GFXBench more or less confirms what TENAA already reported, well, except the phone’s display size, read on.

According to GFXBench, the Galaxy C5 Pro will sport a 5.5-inch fullHD (1920 x 1080) display, along with 4GB of RAM and 64GB of native storage. The device will be fueled by Qualcomm’s octa-core processor clocked at 2.2GHz, which ships with the Adreno 506 GPU, and we’re probably looking at the Snapdragon 626 SoC here, based on the provided info. The Galaxy C5 Pro will also pack in 64GB of internal storage, says GFXBench, and it will ship with Android 6.0.1 Marshmallow out of the box, with Samsung’s custom UI on top of it. On the back of the Galaxy C5 Pro, you’ll be able to find a 16-megapixel shooter, and the same thing can be said for the phone’s front-facing snapper, though the rear-facing camera will be more powerful than the front-facing one.

Now, TENAA said that the Galaxy C5 Pro will ship with a 5.2-inch fullHD (1920 x 1080) display, while GFXBench says that we can expect to see a 5.5-inch panel. So, which one is it? Well, TENAA is usually more reliable when it comes to this, as that is China’s official authority when it comes to smartphone certification, not to mention that GFXBench tends to get the display size wrong sometimes, so this is not all that surprising. The Galaxy C5 landed back in May last year, and rumors are saying that the Galaxy C5 Pro and Galaxy C7 Pro are about to be announced this month, though we still don’t know when exactly. These two devices will become available in China first, and it remains to be seen whether the company plans to sell them anywhere else, in any case, stay tuned. 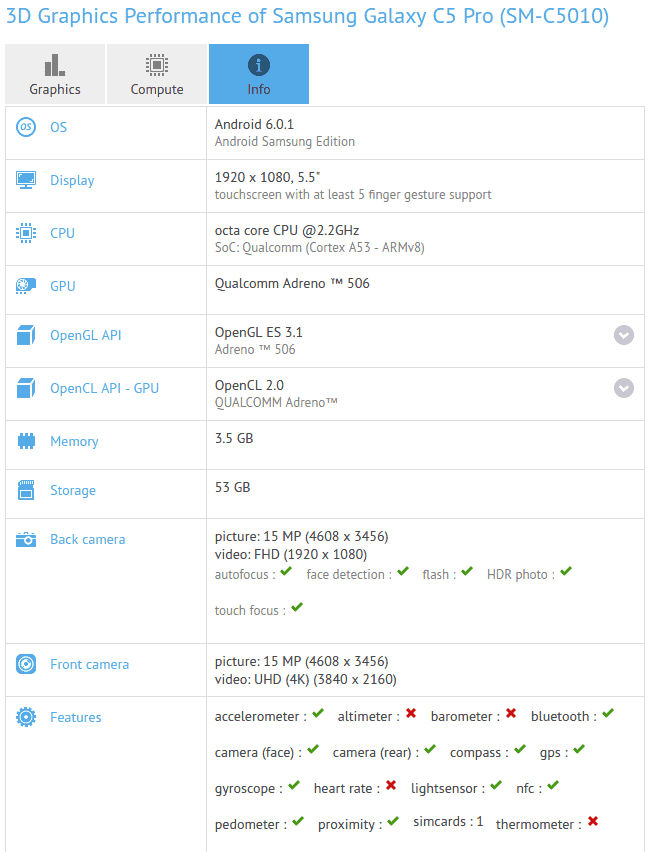