The Samsung Galaxy C5 Pro just surfaced on Geekbench. The company’s upcoming mid-ranger has paid a visit to the benchmarking site, and also revealed its partial specifications. The Samsung SMC5010 (aka Galaxy C5 Pro) is the model number we’re looking at here, and if this info is to be believed, this handset will be fueled by the Snapdragon 625 64-bit octa-core processor. In addition to that, Geekbench reports that the device will feature 4GB of RAM and ship with Android 6.0.1 Marshmallow, and on top of it, you’ll get Samsung’s custom UI, of course.

Now, the Samsung Galaxy C5 Pro surfaced on GFXBench a while back, and these specs actually go hand-in-hand with the ones we’ve seen on GFXBench. In addition to this, the phone had also been certified by both TENAA (China’s equivalent to the FCC) and FCC thus far, while it had also received Wi-Fi certification from the Wi-Fi Alliance (WFA). So, as you can see, all that is left for Samsung to do at this point is to launch this smartphone, and that will probably happen soon based on the provided info. Thanks to TENAA’s listing, we more or less know what will this phone look like, and TENAA’s listing also shared its spec sheet. The Galaxy C5 Pro will be made out of metal, and will ship with a physical home key below the display, which will probably double as a fingerprint scanner. The phone’s bezels won’t be especially thin, just in case you were wondering.

The Samsung Galaxy C5 Pro will sport a 5.2-inch fullHD (1920 x 1080) display, 4GB of RAM and 64GB of expandable internal storage. The device will be fueled by the Snapdragon 625 64-bit octa-core SoC, as already mentioned, and a 3,000mAh battery will also be a part of this package. You’ll be able to find a 16-megapixel camera on both the front and back side of this smartphone, even though its rear-facing shooter will be more capable. 4G LTE connectivity will be included here, while the device will measure 145.7 x 71.4 x 6.95mm, and weight 143 grams. The Galaxy C5 Pro will become available in Dark Blue, Pink and Gold color variants, and it is expected to launch soon. 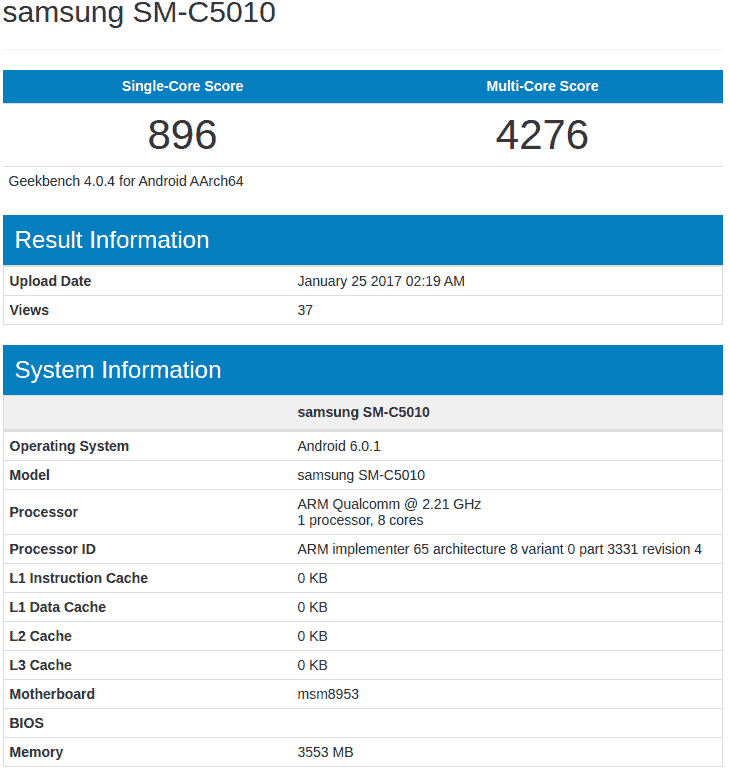