HMD Global hosted a first Nokia 6 flash sale in China earlier today, and the company managed to sell out every single device they had in stock in just one minute. The phone was available exclusively through JingDong Mall (JD.com) in China, and the company had received over 1 million pre-registrations for the first flash sale (1,337,773, to be exact). Well, the consumers quickly grabbed every single one Nokia 6 units that was available, though we do not know how many units HMD Global had in stock to sell. The company will probably not release such an info, but it’s always a possibility.

Consumers in China were able to purchase the Nokia 6 for 1,699 Yuan ($248), which might seem a lot to some of you who considering that this device comes with an entry-level processor, but the rest of its specs are really solid, and so is the device’s build quality. The Nokia 6 will, once again, be available through JD.com soon, the second flash sale will take place next week probably, at least that’s what reports are saying, JD.com did not announce the official date yet. The Nokia 6 was officially introduced earlier this month, and it is the first Nokia-branded smartphone to be released by HMD Global since the company purchased Nokia branding rights from Microsoft. HMD Global is allowed to manufacture Nokia-branded devices for the next 10 years, as per their contract with Microsoft.

The Nokia 6 sports a 5.5-inch fullHD (1920 x 1080) display, along with 4GB of RAM and 64GB of expandable storage. The device is fueled by the Snapdragon 430 64-bit octa-core processor, along with the Adreno 505 GPU for graphics. On the back of the Nokia 6, you’ll find a 16-megapixel camera, while an 8-megapixel shooter can be found on the device’s front side. Android 7.0 Nougat comes pre-installed on the Nokia 6, and a 3,000mAh battery is also a part of this package (fast charging included). There are two SIM card slots available here, and the phone offers 4G LTE connectivity, of course, while it also comes with a set of stereo speakers. This handset also offers a fingerprint scanner which is placed below the display, and it is flanked by the back and overview (multitasking) capacitive keys. 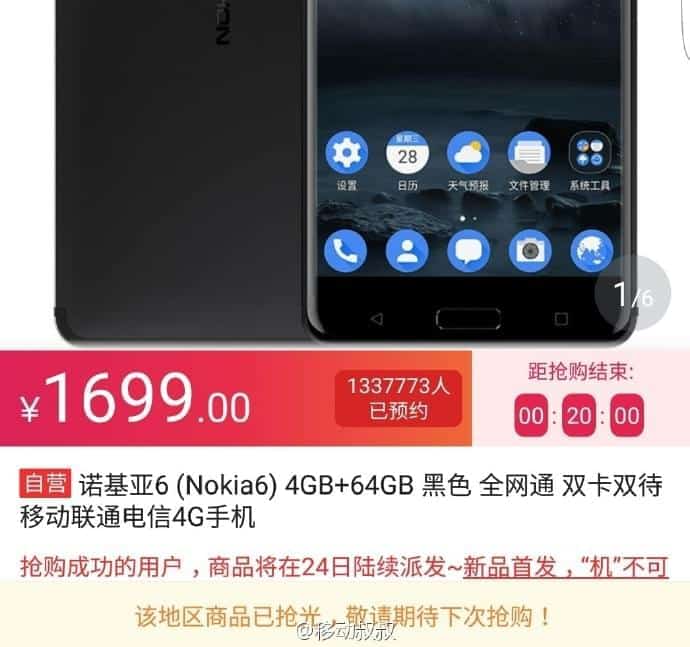