A French startup EnergySquare revealed the latest revision of its smartphone accessory of the same name which allows virtually any phone or tablet to be charged wirelessly. The company showcased its solution at CES 2017, adding how the launch of EnergySquare will be the first step in its mission to revolutionize the way in which society uses energy. The first generation of EnergySquare is scheduled to hit the market during the first quarter of the year, priced at $89.99.

The firm’s technology is centered around a thin sticker which you can attach to any smartphone or a tablet. On the bottom, the sticker is equipped with two electrodes which are connected to a charging port of a device. Once that simple setup is complete, this accessory will allow any phone or tablet to be charged wirelessly. The charging process itself is identical to the one used by other wireless charging technologies as users are only required to place their devices on a specialized pad and leave them to recharge.

The EnergySquare technology currently supports both Micro-USB and USB-C ports, while the pad utilizes the so-called conductive charging technology to simultaneously charge several devices. Regardless of how many phones you place on the EnergySquare pad, the charging process will be just as quick. This feature represents a significant advancement in comparison to traditional wireless chargers which rely on electromagnetic induction and aren’t able to simultaneously charge several devices, at least not at reliable speeds. The only obvious downside to this solution is that it blocks the physical charging port of one’s device, which is an issue that the French startup promised to address next year with the second generation of the EnergySquare kit. This new iteration of EnergySquare will allegedly include a physical charging port at the bottom of its sticker. Regarding more immediate news, the first generation of this product is slated to be released by spring and will include five stickers and a single wireless charging pad. EnergySquare was created on the back of a successful Kickstarter campaign which was concluded in mid-2016. The trailer below highlights all of the most important features of this innovative solution. 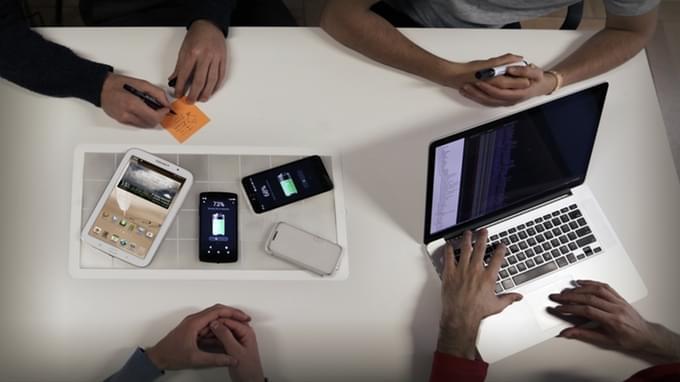