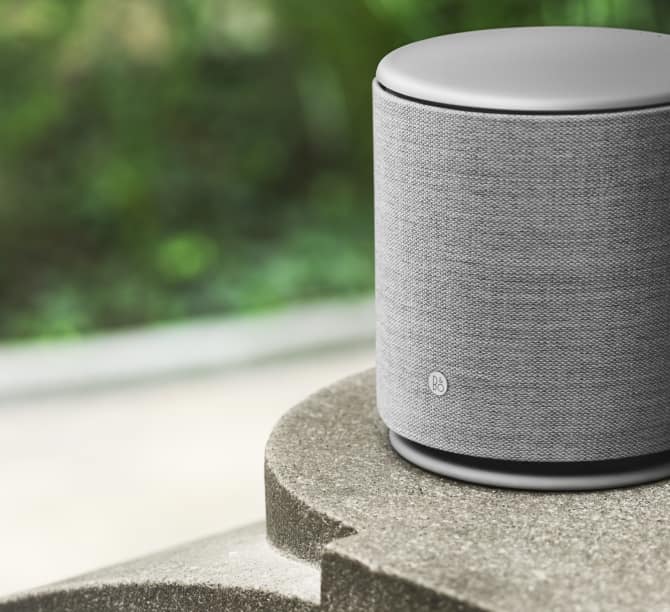 CES is absolutely drowning in highly compelling speakers this year, packed to the gills with style and features, yet even among these, Bang and Olufsen have managed to hit the nail on the head with their new M5 model and put out a serious competitor for best in show. To put things as simply as possible for those in the know, the M5 takes just about everything that's great about the Beoplay speaker ecosystem, adds in some serious smarts, and tacks on multi-room capability for good measure. For the uninitiated, this means simple and intuitive design, excellent sound quality, and a very high degree of user friendliness, among other hallmarks of Bang & Olufsen's work.

The speaker features the signature powerful sound quality that B&O hardware is known for, and thanks to the round design, the sound can be sent out in a complete 360-degree radius, with the effect magnified by Beoplay's own True360 technology. Since it may not always be the centerpiece of the room, the M5 comes with three acoustic and directional presets; standing, wall, and corner. The direction, radius, and intensity of sound can all be tightly controlled as well. Naturally, this wouldn't be a CES speaker debut without bringing the smarts, and this piece certainly doesn't skimp in that area.

Chromecast support being built right in, a trend that's practically becoming standard issue in high-end speakers that get unveiled at CES this year, is just the tip of the iceberg. For starters, that functionality is enhanced by the cloud, allowing more than one Chromecast-capable device to connect to the M5 simultaneously, and allowing for total sound mirroring, whether you're taking a call or playing a game. Normal Bluetooth and Wi-Fi connectivity are also on board, of course, and they allow the speaker to talk to others like it, as well as select other members of B&O's lineup, making the speaker a fairly compelling home sound system solution. The whole kit and kaboodle will be hitting the market effective immediately. Those who are so inclined can go through B&O's website, or select retailers, to pick one or more up for themselves at a price of about $599 a pop in black or white.