Those of you who own the HTC 10 or LG G Pad X 8.0 from T-Mobile are in luck, as the Android 7.0 Nougat update rollout has just commenced. HTC tipster, LlabTooFeR, reported that the HTC 10 Android 7.0 Nougat update is starting to roll out for T-Mobile users, and it seems like he was not wrong, as a number of HTC 10 owners have reported that the update had already landed on their smartphone. Do keep in mind that T-Mobile still hasn’t updated the HTC 10 software update page, at least not at the time of writing this article, but they’re expected to do that soon.

You’ll need to download quite a large file if you’d like to update your HTC 10 to Nougat, as the update is around 1.22GB, which was to be expected. You can wait for the HTC 10 notify you that the update is ready (presuming you have that option enabled), or you can manually check if the update is ready by navigating to Settings -> About -> Software Updates -> Check Now. On the other hand, the T-Mobile LG G Pad X 8.0 is also getting Nougat as we speak, though it seems like the update is rolling out through LG Bridge, and not many people have been able to install it, even some of them who tried to do so through LG Bridge. If you’d like to try it out, you’ll need to download LG Bridge for your computer, install it, connect the LG G Pad X 8.0 to it and then try to update. Now, considering that the update is available for some users through LG Bridge, we’re guessing that it will be made available for a wider audience really soon.

As part of this update, you’ll get a number of Android 7.0 Nougat features, though the changelog hasn’t been posted for either of these two devices, so we’re not entirely sure what to expect, well, at least in LG G Pad X 8.0’s case. Android 7.0 Nougat had been available for the global HTC 10 for a while now, so chances are that you’ll get an identical update to a T-Mobile unit, which means you’ll be getting pretty much every single major feature Google introduced along with the Android 7.0 Nougat, including a more detailed notification shade with more options, new Doze functionality, split-screen mode, etc. Such features are probably going to be available on the LG G Pad X 8.0 as well, but we’re still not sure, we’ll just have to wait and see. 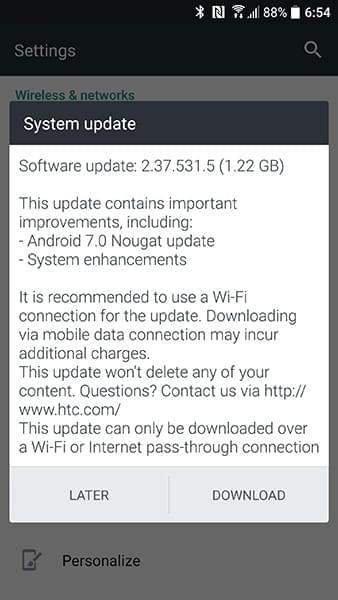