Amazon’s Alexa will be coming to Volkswagen’s future cars, or at least the plan for Volkswagen as they recently made an announcement during CES that they want to integrate the digital assistant software into their vehicles. As much of the auto industry starts to shift towards adding more smarts into their cars, options like Android Auto and Apple CarPlay are only really just beginning to become more mainstream. Volkswagen is taking things a step further and looking to give their vehicles an A.I. so that drivers will be able to complete voice activated tasks, and won’t be just limited to functions of the vehicle either.

With Alexa in the vehicle, Volkswagen drivers will be able to do things like control and manage smart home products that are already compatible and interact with Alexa at home, which means drivers will easily be able to to talk to Alexa on their way home from work and request that the thermostat be turned on. Naturally, should users need to replace something for their vehicle, like spark plugs, Alexa inside the vehicle will be able to handle this, too, and it sort of makes sense as drivers will be behind the wheel of the very thing they need to order stuff for.

Volkswagen says that the idea is to have a tap-to-talk button on the in-car touchscreen that will activate Alexa, and after Alexa has been activated (much like a user would tap the mic button on Android’s Google Search widget from the homescreen to activate Google Now’s voice actions) they’ll be able to initiate whatever task that they had in mind, whether it’s managing a smart home product on the drive or something as simple as playing a song. Beyond interacting with Alexa inside the vehicle, drivers will be able to use in-home Alexa-powered devices to pick up details about their cars. This will include ordering the replacement parts needed, as well as checking things like the levels of the car’s fluids such as fuel. All of these car-related tasks will be possible thanks to a new Alexa skill that was created which Volkswagen announced alongside the in-car integration with the digital assistant. 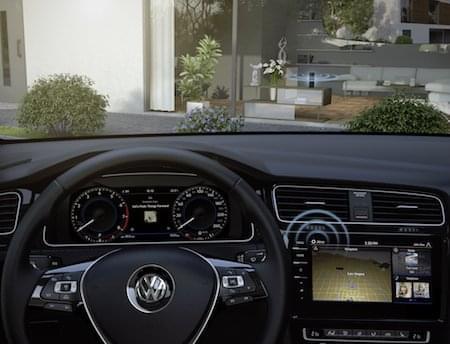