Alcatel is sending out press invites for their Feb. 27 event at Mobile World Congress (MWC) in Barcelona, with a tag line which reads “Light Up”. The invite shows an image of what appears to be the rear of a smartphone covered in brightly colored LEDs. The event will start at 9:30 AM (local time) and rumors are suggesting that Alcatel will announce a total of five smartphones. At least one of these new smartphones will feature a modular design similar to the Motorola Moto Z family. As well as including a light up panel or smartphone back. It is expected that this lighting up mod will be beat-responsive and could even illuminate as an enlarged notification panel. It is possible that several, or even all, of Alcatel’s new devices will feature a modular aspect and perhaps the light board unit will be compatible with all of these devices.

Alcatel is owned by TCL, the same company that has the rights to BlackBerry’s devices, and there has already been similar models released wearing either an Alcatel or BlackBerry badge with the main difference being the software that the device runs on. At this juncture it is not considered likely that Alcatel will be releasing a smartphone similar in design to the new BlackBerry Mercury, which features a front-mounted QWERTY keyboard. However, the company may well release a device with similar hardware under the skin – which according to rumors, will be decidedly mid-range, combining a Qualcomm Snapdragon 625 chipset with 3GB RAM – although this specification should be more than capable of running Android well. BlackBerry appears set to unveil their new smartphone on February 25, a couple of days before Alcatel’s announcement.

In previous years, Alcatel has released a range of devices with different screen sizes, resolutions and internal hardware, which is perhaps where the portfolio of five devices comes from. It would certainly be a bold and interesting move if Alcatel were to offer all their MWC 2017-announced smartphones with modular functionality. Although, the details on what is to be expected are a little limited at the moment, with the current invite not offering too much more in the way of new information. 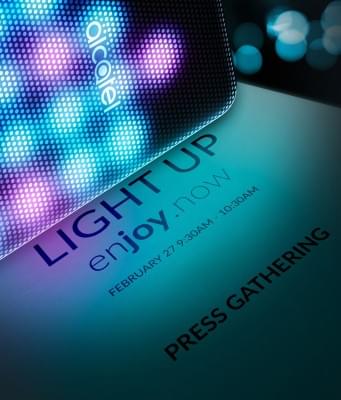