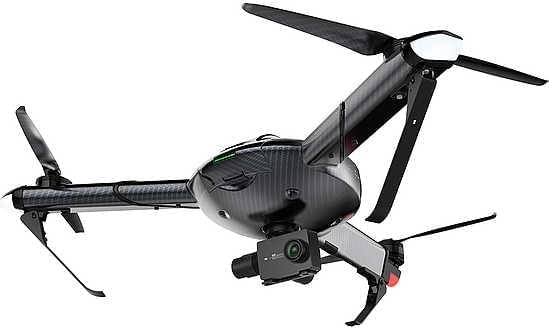 Xiaomi and Yi will participate in the upcoming Consumer Electronics Show (CES) in Las Vegas, and it seems like Yi might introduce a new action camera, and a new drone as well. According to a new report, Xiaomi-backed Yi Technology company will announce the Yi Erida drone and the Yi 4K+ action camera during the tradeshow. These are two rather interesting products, let's see what they're expected to offer.

The Yi Erida Drone is, according to the company, the world's fastest tricopter. This gadget was created in cooperating with Atlas Dynamics, and is the world's first full carbon-fibre smart drone available to the general public. This drone can reach speeds of up to 75 miles per hour for up to 40 minutes, as it's quite light overall. You will be able to control this drone using the Yi Erida mobile application, which gives you a number of options. This drone features a high-resolution camera, and you can use it to record up to 120 minutes. The Yi 4K+ action camera will be able to capture 4K video at 60 frames per second (FPS). This is Yi's third action camera, and it has the ability to capture 4K footage at double the frame rate of its competitors. This camera sports a 2.19-inch display, and can stream videos over Wi-Fi, which is a nice feature to have, that's for sure.

In addition to announcing these two gadgets, Yi Technology could launch new home security cameras, dash camera and the Yi M1 mirrorless camera. Now, Xiaomi, on the other hand, is expected to intro a number of smart gadgets as well, at least based on the company's recently released teaser. Xiaomi is expected to hit a number of markets outside of China in 2017, and it seems like the company is planning to make some serious announcements during the Consumer Electronics Show next month. Xiaomi could also re-announce some of their smartphones during the tradeshow, and new phones are also a possibility, we'll see. All in all, we're in for some exciting announcements when it comes to CES, do keep in mind that the tradeshow kicks off in less than a week in Las Vegas, so stay tuned.