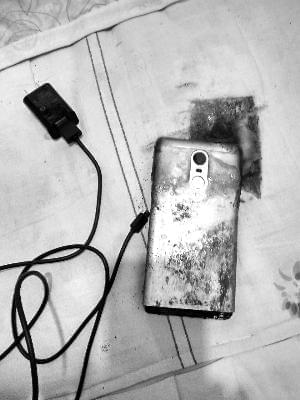 According to the latest report from China, Xiaomi is actually asking its customers with burned Redmi-branded handsets to sign confidentiality agreements. This news surfaced following various reports claiming some users experienced issues with their Redmi smartphones, some of them actually 'exploded', not in the full sense of that word, but they caught on fire. Now, this specific report talks about one user who was allegedly asked to sign a confidentiality agreement with the company in order to receive compensation for the destroyed Redmi phone, read on.

The report says that the aforementioned Redmi-branded smartphone was purchased on March 1st in China, and was a gift from a mother to a daughter. The phone was running for months, until it finally caught on fire on December 21st. The phone was being charged at the time of the incident, and unplugging it did not help at all it seems. The victim claims the phone was charged by the original phone charger and cable, and the phone was not used while it was plugged in. Xiaomi was quick to respond to the complaint, and after investigating the case, they offered a full refund to the victim, and an additional 600 Yuan as an apology. Well, according to the newly-surfaced report, that compensation required the victim to sign a confidentiality agreement, which required her not to talk about the case to the media, or anything of the sort. As part of this whole story, the photo of a burned Redmi-branded device also surfaced, and it is included above this article. The source does not mention what phone exactly are we looking at here, but this could be the Redmi Note 3, though we're only guessing at this point.

Do take this info with a grain of salt, as we cannot confirm that it is legit, but we did stumble upon a couple of reports when it comes to 'exploding' Xiaomi smartphones, so who knows. In any case, this does not seem to be a general problem with Redmi-branded smartphones, or anything of the sort, as it was with the Galaxy Note 7. It is even quite possible this si not Xiaomi's fault, some phones tend to malfunction after a while. If we stumbled upon any additional news regarding all this, we'll make sure to let you know about it.