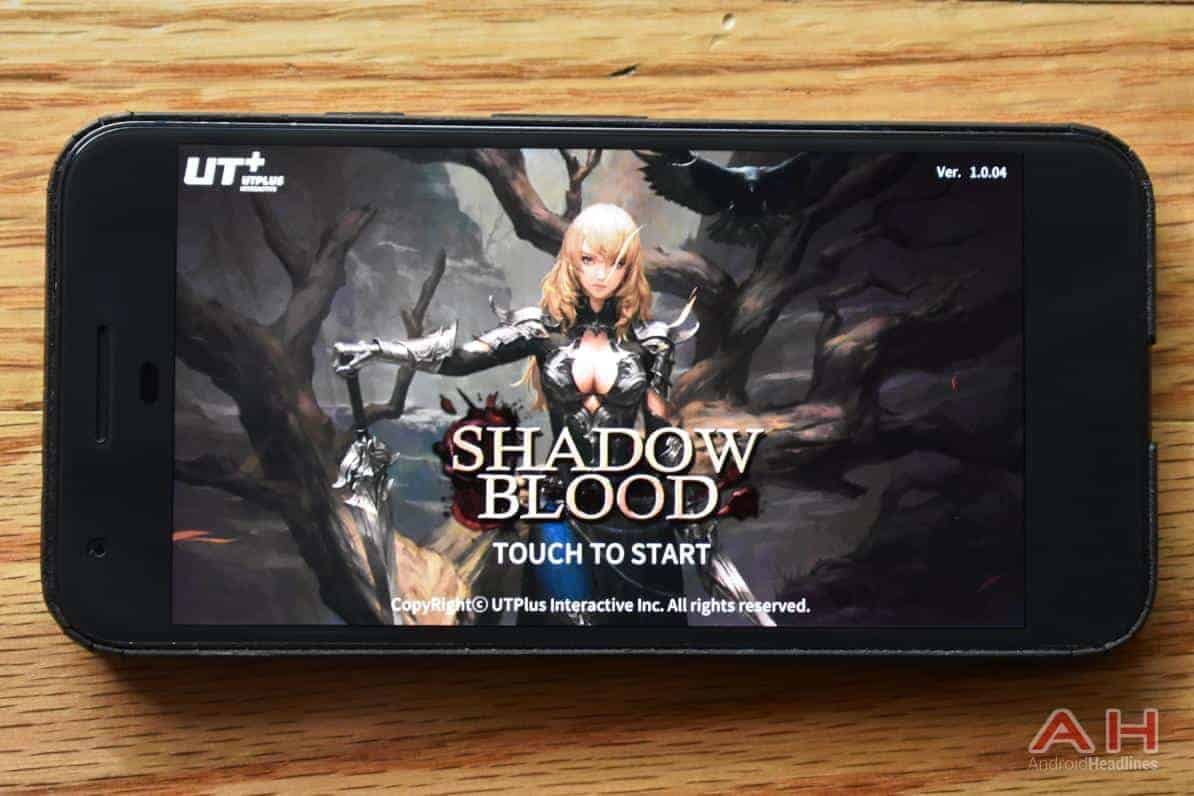 Mobile games have come an extremely long ways in the last five years, bridging the gap between what you can find on mobile and what you'll find on consoles and PC. One genre of mobile game which seems to have taken quite the liking to the mobile smartphone platform are action RPGs, more commonly known to many as dungeon crawlers, and it's easy to see why as the gameplay and controls have been adapted well to touchscreen devices. A new game in the action RPG genre which is on its way to being released to western markets is a game called SHADOWBLOOD, and while it may look like many of the other offerings in this particular category of mobile game, it sets itself apart in a number of ways that allow it to be engaging and entertaining for hours on end. Let's take a look at how it stacks up.

Before you can enjoy the world of SHADOWBLOOD and all it has to offer, you'll need it installed on your device. Unfortunately the game hasn't released in western markets as they're still finalizing the localization. That being said, you can follow their Facebook page for the latest news and updates on an exact release, as well as pre-register for their special launch event, and view the trailer below.

If you've played any other ARPG titles on Android before, then right from the start SHADOWBLOOD will make you feel at home. It kicks things off with a nice little story introduction to get you acquainted with the game's storyline, and then you're given the opportunity to jump right into the game and test out a character before making your own. 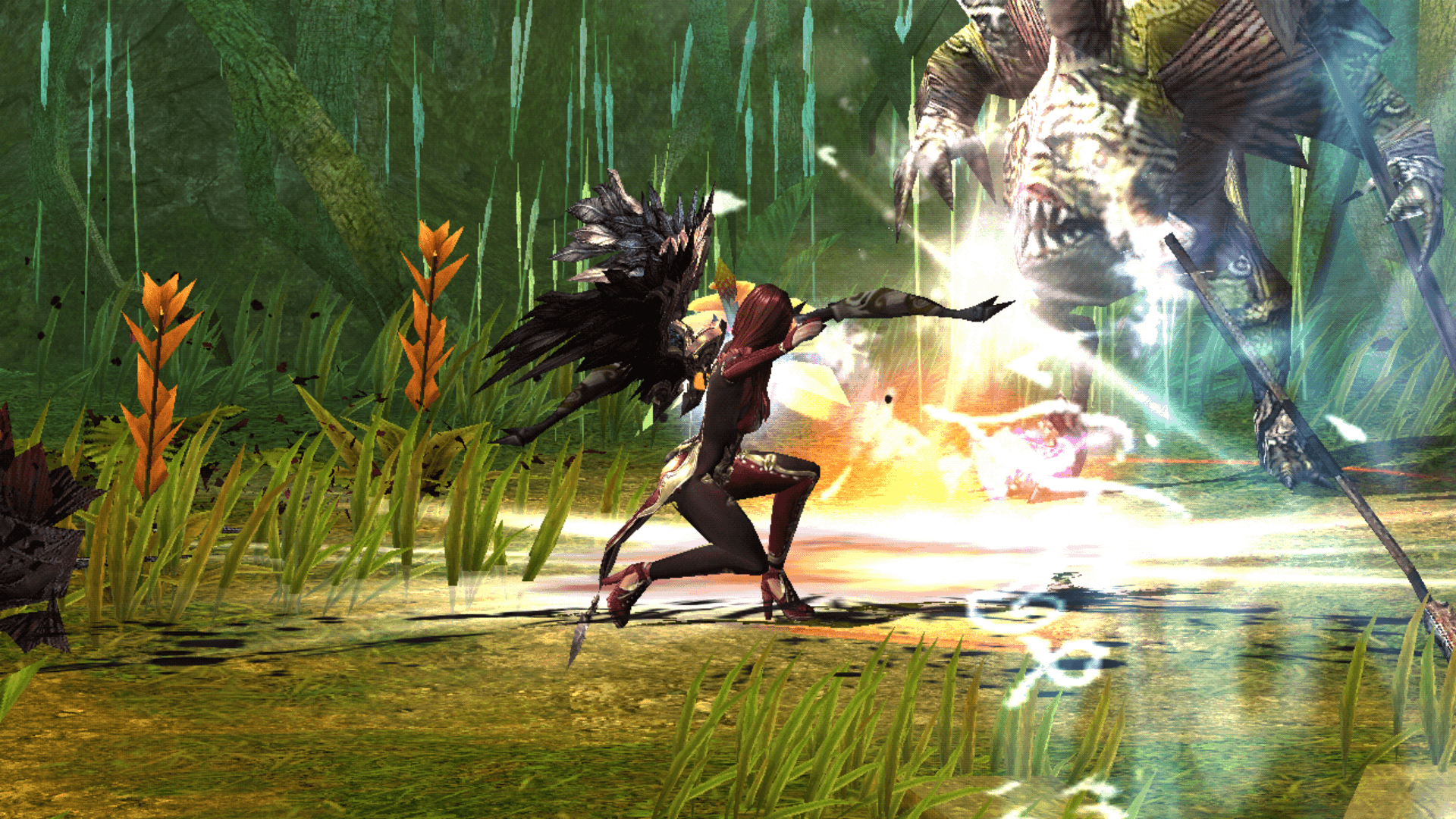 As with all other ARPG games on mobile you have a handful of classes to choose from, and no matter what you choose you can always go and create another character of a different class if you fancy testing out their abilities. If you don't care for the character you've already created or you simply want to try out another, you can tap the slide out menu that sits on the left edge of the main screen once you have started the game, and tap the character selection button to take you back to the character select screen and create a new character. This doesn't get rid of your current character either, so you can do this freely knowing your other one will be there should you choose to switch back to it.

There are a total of three classes, and you can pick between a male or a female character for each class. The classes are not listed by their type, but rather by a name, although you can basically tell their class type by the weapons they wield. That said, the official class names are Archer, Berserk, and Assassin. Each class will also have a level of control difficulty, so players who are new to action RPG games may want to start off with an easier type. 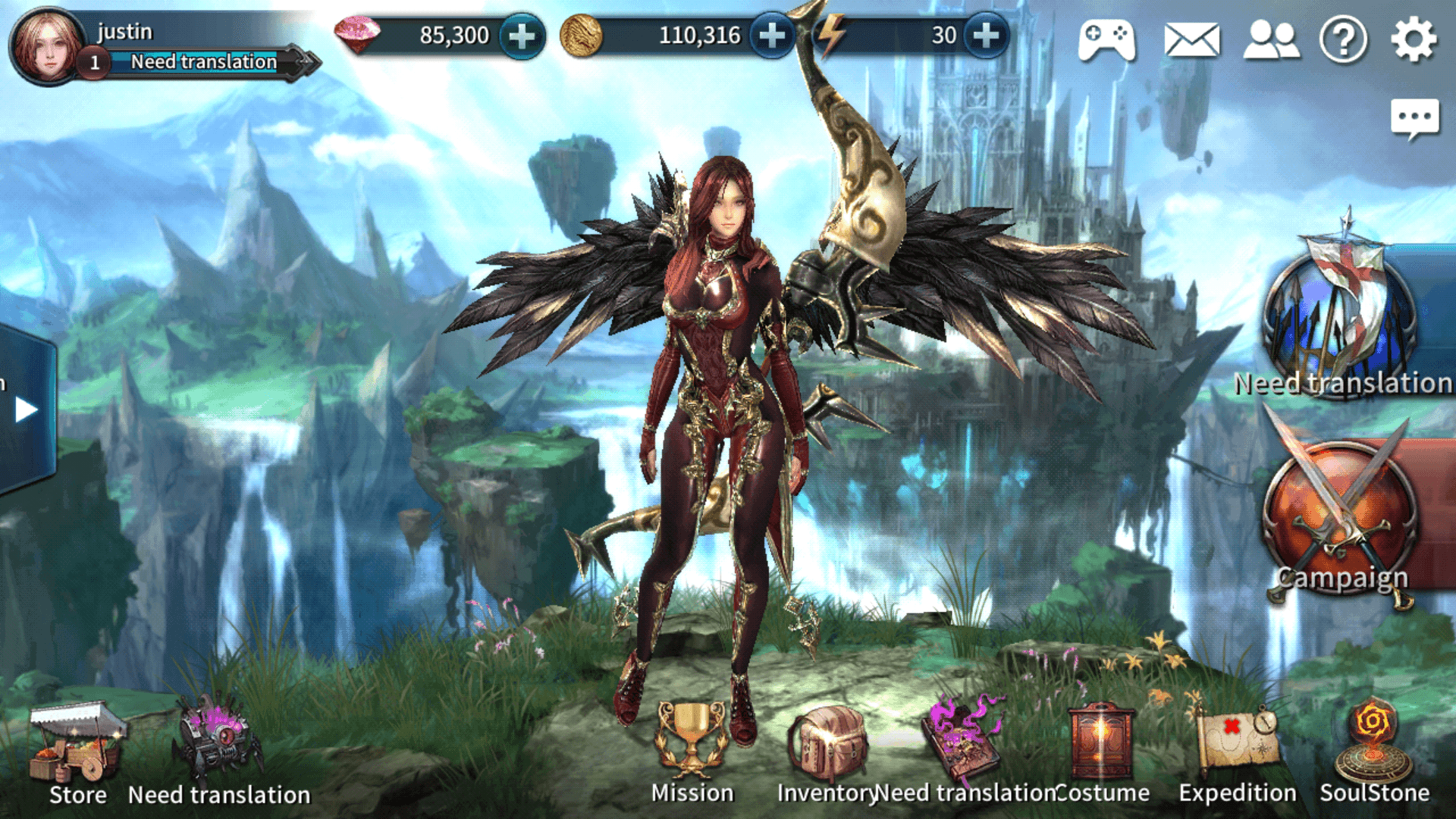 There are quite a few elements to this game and although it may seem overwhelming at first, you get used to things quickly. The main home screen will list things like your character level along with their portrait, how much currency you have out of the diamonds and gold (both of which are in-game currency, although diamonds are premium and will be harder to come by), and how much energy you have, which is what you'll need to take on missions. This is regenerative, so if you run out you can either wait out the time before playing some more or you can refill your energy from the store with an in-app purchase, where you can also pick up special items and game packs, or more currency.

The game also allows you to pick up and equip costumes, and you can have costumes for your skin – your characters main look, your weapon, and wings. Costumes are mostly aesthetic and for show, but they do help to apply some stat increases as well. To buy costumes you'll need to have about 5000 diamonds for each costume piece (some of which will only be available at a discount for a limited time or through an event) so you'll want to choose wisely as diamonds will be more rare.

In addition to the campaign mode you'll have other modes too, including expedition which lets your characters farm premium currency automatically without you having to play, as well as Bloody Battlefield which is a PvP mode, Arcand's Lair which tosses waves of enemies at you, Raid Mode & Crack of Devildom which are essentially boss battles and raids you can complete with other live players, and Altar of Ordeal which lets you complete challenges of varying difficulty to earn rewards. All of these modes will need to be unlocked before you can access them.

If you enjoy the social aspects of games like this, you'll be happy to know that SHADOWBLOOD also has a chat room you can enter to talk with other players, something which has more or less become a standard feature for action RPGs. Along with in-game chat, you can also add friends within the game and send each other friendship points, as well as gifts, both of which come in handy. Of course, there are also login events, and each day you log in to play you'll receive some sort of bonus whether it be gold, diamonds, or items that you can equip your character with.

For the most part, SHADOWBLOOD will look and feel like many other action RPGs that are already available on Android, and there are a lot of them. That being said, this isn't a bad thing at all. SHADOWBLOOD does a great job at making most of if not all its content engaging, and this comes right down to the gameplay mechanics, the class types, combat, and even the visuals which are top notch and better than many other action RPGs that are available. Content will also continue to expand as new updates and patches are added in that bring new levels and chapters, and of course players can expect events from time to time as well.

When it comes down to it, SHADOWBLOOD is a great little game that any action RPG fan will enjoy. It has enough going for it that is familiar so those who are used to these types of games should be able to get going nice and fast, and it's still simple enough that it shouldn't be too challenging for players who are new to the genre. With loads of content already available and more to come once the game is officially released in the U.S., SHADOWBLOOD is sure to capture a large audience, as it should. It also doesn't hurt that character models and combat special effects are gorgeous, either.