Samsung has already started rolling out beta builds of Android 7.0 Nougat to a few of its recent flagship smartphones, and if latest developments are anything to go by, the company’s flagship tablet from last year is apparently also in line to taste the latest flavor of Android, sooner rather than later. According to a recent listing on benchmarking site GFXBench, the 9.7-inch Galaxy Tab S2 model might just be the next Samsung device to get the much-awaited update, ahead of a few popular Samsung smartphones. The listing has now revealed that Android Nougat is now being tested on the Galaxy Tab S2 (SM-T810), which is certainly good news for those who had been hoping to see the latest major version of Android on their tablet.

The Galaxy Tab S2, of course, comes in multiple variants, and so far, the 9.7-inch model is the only one that has been spotted with Android Nougat on board. There’s no word at the moment on the 8-inch variant, so owners of that particular model will still have to wait and hope that Samsung eventually rolls out Android 7.0 to their device as well. Either way, with the Galaxy Tab S2 now expected to receive Android Nougat, it will be interesting to see how long the company takes to roll out the update. Remember, the company is yet to roll out the final stable build of Android Nougat to its latest flagship smartphones, although many other tier-1 vendors, like Sony, have already started doing that for their respective flagships.

The Galaxy Tab S2 was originally launched last year with Android 5.0.2 Lollipop on board. The device has since received the Android 6.0 (Marshmallow) update, so this will be yet another major version update for the premium slate. It’s important to note that the Nougat-running versions of the Galaxy Tab S2 (SM-T810, SM-T815 and SM-T817) listed on GFXBench are all powered by the Exynos 5433, so in case you own one of the Snapdragon-powered models, you might still need to wait to find out how long it will take for Samsung to roll out the update for your particular model. 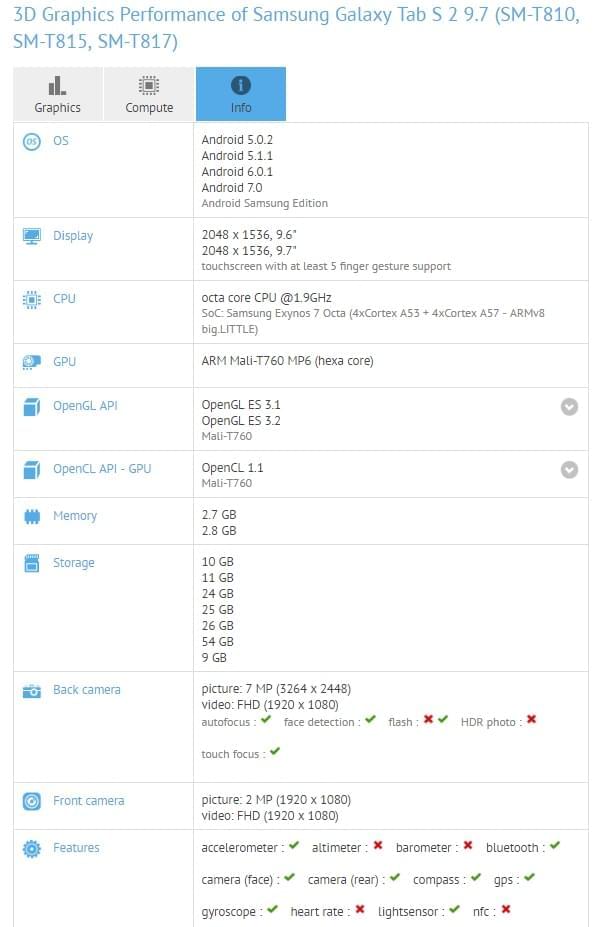