With the Galaxy Note 7 permanently discontinued, Samsung’s current flagship smartphones are the Galaxy S7 and Galaxy S7 Edge that were unveiled at the Mobile World Congress trade show back in February of this year. While they are both very capable smartphones in their own right, in a day and age where technology gets outdated in the blink of an eye, they have started getting a bit long in the tooth, and Samsung very likely can’t wait to bring its next-generation flagships to the market. That, according to some reports, is likely to happen at next year’s MWC, which will be held from February 27th to March 2nd in the Spanish city of Barcelona.

Expected to be named the Galaxy S8, the device has been doing the rounds in the rumor mills recently, which means we’ve already read quite a bit about some of its probable features. One of those rumored features was said to be a dual rear-camera setup that’s reportedly comprised of a 13-megapixel Sony sensor and a 12-megapixel unit made by Samsung itself. However, a new source in China is now claiming that contrary to earlier rumors, the upcoming handset will actually launch with a single camera on the back. There’s no word, however, on whether some of the other expected Galaxy S8 derivatives will come with the rumored dual-camera setup, or if Samsung has, at least for now, discarded the idea for good.

The news comes from Weibo user ‘IceUniverse’, who posted this info on the popular Chinese microblogging site earlier today. According to the post, Samsung has dropped its dual rear-camera idea recently, and is now looking to go ahead with the more mainstream single-lens module for its upcoming flagship. IceUniverse, however, didn’t give any reason for Samsung’s apparent change of heart. Dual rear-camera modules, of course, are becoming relatively mainstream now, with some of the largest and most reputable smartphone manufacturers like Apple, LG and Huawei, launching dual-camera handsets in the past year. As for the latest rumor, it remains to be seen how reliable this particular piece of information is, so for now, a generous pinch of salt may well be in order. 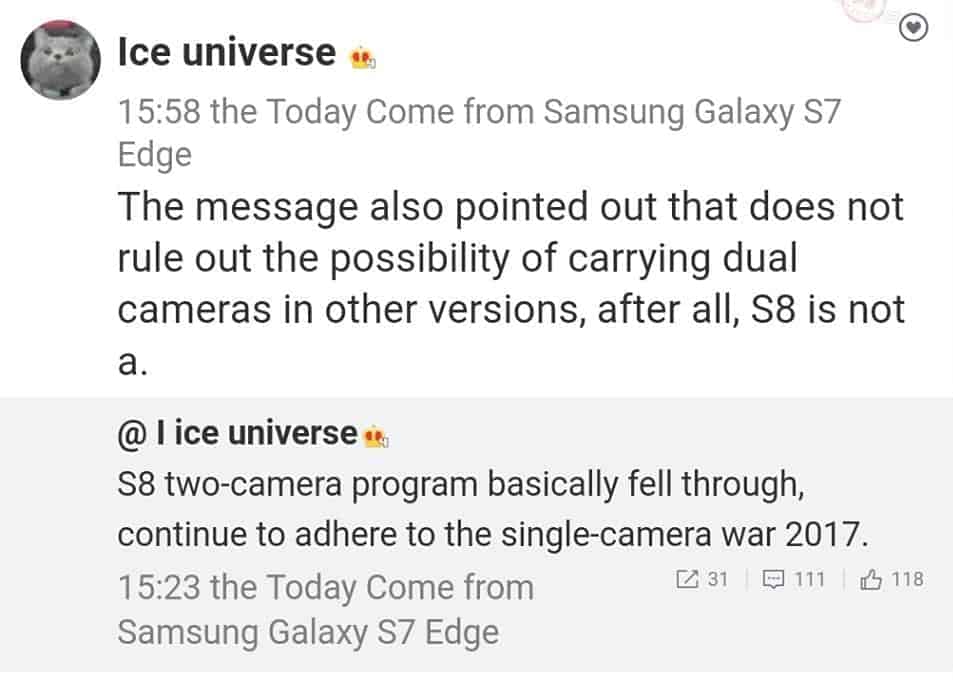