Skip to content
Advertisement
Trusted By Millions
Independent, Expert Android News You Can Trust, Since 2010
Publishing More Android Than Anyone Else
25
Today
25
This Week
523
This Month
4541
This Year
114570
All Time
Advertisement Do we have a good one for you today – the Sony Xperia XZ takes on the new Xiaomi Mi Note 2. The all-metal Xperia XZ with its typical Sony ‘look’ and the newest Mi Note 2 with its curved glass display and glass back looks like the retire Samsung Galaxy Note 7 – beautiful in every respect. The biggest problem is getting a hold of the Mi Note 2, especially the global unit with coverage for US carriers. Let’s look at just what these two devices have in common, if anything, and then we will take a closer look at each one in hopes that we can determine a winner of this comparison.

The Xperia XZ and Mi Note 2 were only released a month apart, so they do have a few things in common – starting with the fact that they both use a Full HD display. The size of the display and the technology used are different. In one of the more critical areas, these devices see eye-to-eye with a Snapdragon 820 and the revised Snapdragon 821 processor and an Adreno 530 GPU. The primary cameras are almost identical 23MP Sony sensors and should take terrific pictures. The both have Hi-Res audio for listening through the earphones, but the Sony tops it off with dual stereo front-facing speakers. They both have a non-removable battery – 2900mAh in the Xperia XZ and 4070mAh in the Mi Note 2 – with Quick Charge 3.0 capabilities. They have the usual suspects – WiFi, Bluetooth v4.2, GPS, NFC, and they both have the newer reversible Type-C USB port for charging and data transfer.

Sony’s latest Xperia XZ does have a model destined for the US but does not even have the software for the fingerprint sensor to work. That means no unlocking your mobile device or authorizing purchases by your fingerprint. By flashing the UK firmware to the US Xperia XZ, you can use the fingerprint sensor – something you should not have to do on a flagship phone sold in the US. The Xperia XZ uses an all-metal backing. Nobody will mistake the Xperia XZ as anything but a Sony smartphone. It retains the familiar Sony rectangle shape with its large top and bottom bezels. Let’s see how it stands up to the new Xiaomi Mi Note 2.

The Sony Xperia XZ still uses an IPS FHD display of 5.2-inch with a resolution of 1920 x 1080 pixels with a respectable 424 pixels-per-inch (PPI.) Sony did step it up and selected the 64-bit Snapdragon 820 quad-core processor with dual cores clocked at 1.6GHz and dual cores clocked at 2.15GHz. Together with the Adreno 530 GPU, it should handle any graphics you can throw its way. It packs only 3GB of DDR4 RAM, and you can have your choice of 32GB or 64GB of expandable internal memory.

One place Sony has always excelled is their cameras and lenses, and this continues in the Xperia XZ’s camera area. The Xperia XZ sports a new 23MP Sony lens for its primary camera with an aperture of f/2.0, 24mm, phase detection autofocus (PDAF) and laser autofocus, and LED flash. For its FFC it uses a huge 13MP sensor with a f/2.0, 22mm, and HDR capabilities allowing you to take great selfies or a video chat. The Xperia XZ uses a smaller 2900mAh non-removable battery with Quick Charge 3.0 to give you a rapid charge when needed.

The Xperia XZ, like the Mi Note 2, comes with its Hi-Res audio and that great sound through the earphones or the dual front-facing stereo speakers on the XZ. It also comes with IP68 certification for dust and water resistance – something not found on the Mi Note 2. The Xperia bands do not allow it to operate on all major US carriers (only AT&T or T-Mobile) and offering no fingerprint sensor for unlocking the device or authorizing mobile payments. It measures 146 x 72 x 8.1MM and weighs in at 161 grams. It comes in Mineral Black, Platinum, Forest Blue, or Deep Pink. It will cost you a sizable $699 for this Sony flagship. 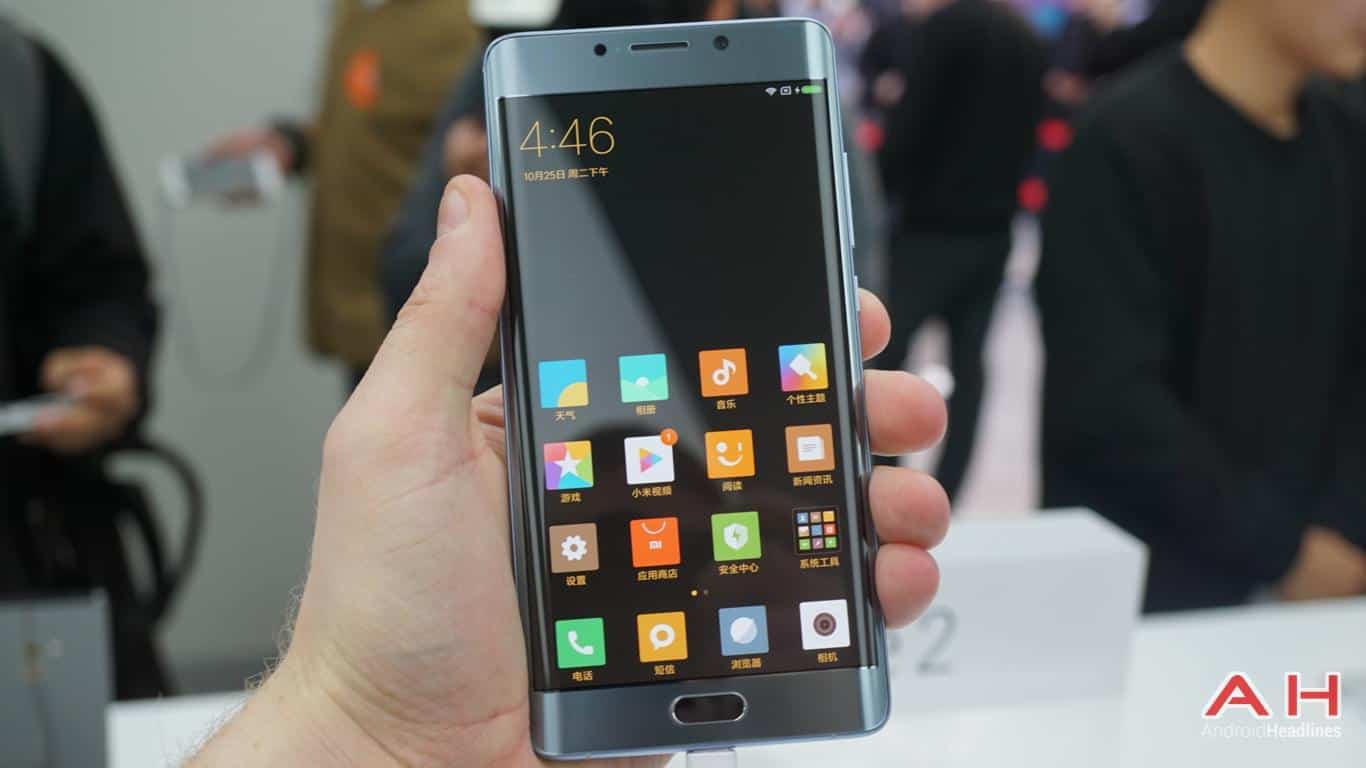 After over a year and a half of waiting, Xiaomi launched its most powerful device, the Mi Note 2. Except for the 5.7-inch Full HD display, the Mi Note 2 looks the part of a Galaxy Note 7 – dual curved AMOLED display and the same ‘3D Glass’ backing and the front ‘Home’ button – make it a dead giveaway for Samsung’s Note device that was released this year. Originally designed to go up against the Galaxy Note 7, it will be interesting to see just how well it sells now that the Note 7 is out of the picture. We are looking at the soon to be released Global model for sale in the US that will handle all of the carriers. Let’s see how well it holds up to the Sony Xperia XZ flagship.

The Xiaomi Mi Note 2 uses only a Full HD AMOLED but a large 5.7-inch a resolution of 1920 x 1080 pixels with 386 PPI because of the larger display size. Xiaomi grabbed the revised 64-bit Snapdragon 821 quad-core processor with dual cores clocked at 1.6GHz and dual cores clocked at 2.15GHz and left it with the Adreno 530 GPU for all of your graphic needs. It packs 6GB of DDR4 RAM and 128GB of non-expandable internal memory.

Xiaomi did an excellent job in the camera area with a new 22.5MP Sony lens for its primary camera and an aperture of f/2.0, phase detection autofocus (PDAF,) a dual-tone LED flash, and EIS gyro for stability. For its FFC it uses a nice sized 8MP Sony sensor with an f/2.0 aperture, and autofocus capabilities to give you great selfies or video chatting. The Mi Note 2 uses a large 4070mAh non-removable battery with Quick Charge 3.0 to give you a rapid charge when needed.

The Xiaomi Mi Note 2, like the Xperia XZ, also comes with its Hi-Res audio and that great sound through the earphones. It has no dust or water resistance built-in. The Global model of the Mi Note 2 may be their first foray into the US market – it operates on 37 Bands and covers all US carriers. It has a fingerprint sensor for unlocking the device and NFC for authorizing mobile payments. It measures 156.2 x 77.3 x 7.6 mm and weighs in at 166 grams. It has an IR Blaster built-in, and it comes in Piano Black and Glacier Silver. The phone comes with Android 6.0.1 Marshmallow, and the company’s MIUI 8 OS installed on top of it. It will cost you a reasonable $515 for this flagship. 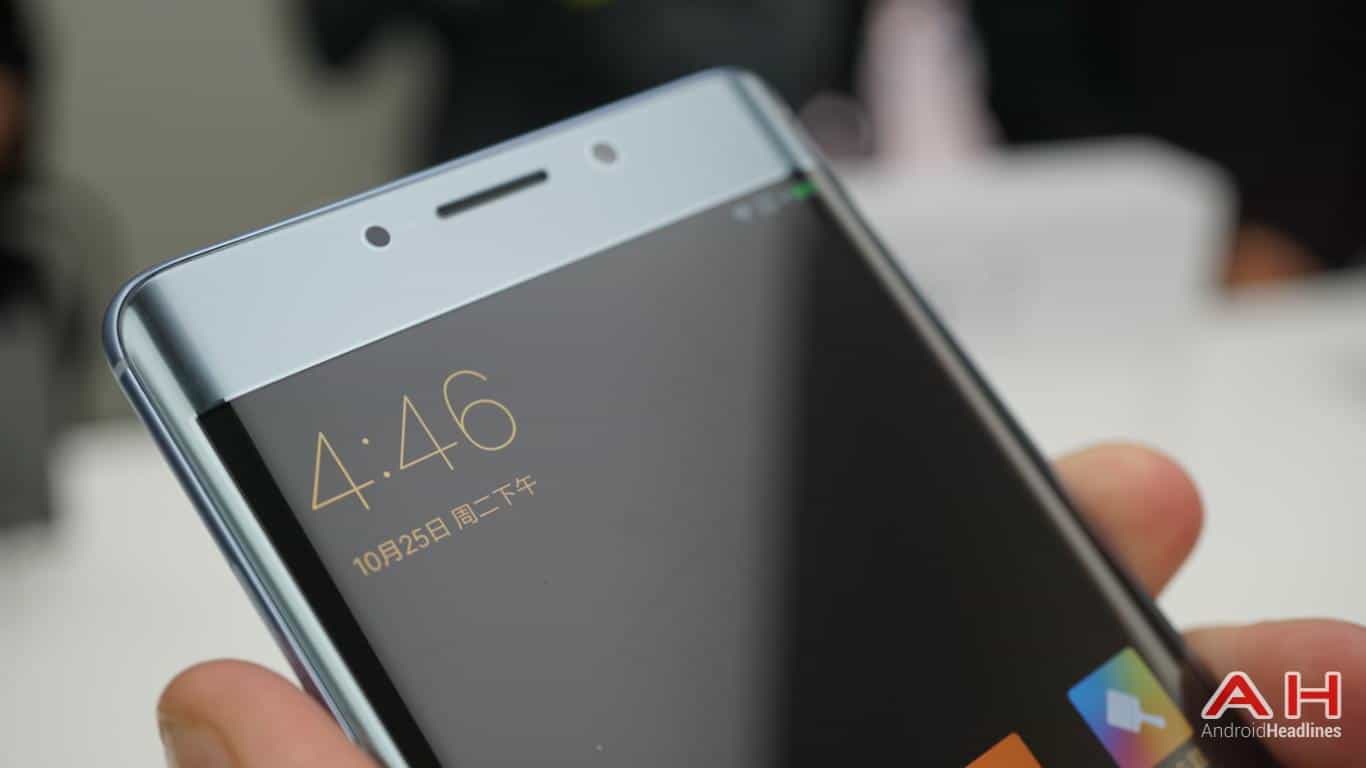 This decision was easy – the Xiaomi Mi Note 2 is the winner of this competition. It has a larger AMOLED display, a processor that is 10-percent faster, 6GB of RAM and 128GB of internal storage, a working fingerprint sensor to unlock the device or authorize mobile payments, and a much larger battery. You get all of this for almost $200 less than the Sony Xperia XZ.

Yes, the Sony Xperia XZ has an IP68 rating against dust and water. Yes, it has dual front-facing stereo speakers. Yes, it has expandable memory. However the display is smaller, and LCD, one-half the amount of RAM, a smaller battery, and no working fingerprint sensor, and they have the nerve to charge $700.

The Mi Note 2 wins on looks, specifications, and pricing. If you must have your Sony device with fewer features and more cost, then go for it. For me, the Mi Note 2 is the winner.