Do we have a good one for you today – the Samsung Galaxy S7 Edge goes up against the new OnePlus 3T. I know that the S7 Edge has been out for several months, but seeing that it is Samsung’s current flagship with the loss of the Galaxy Note 7 model, we felt it fitting that it represents Samsung. It is, after all, the model they will be pushing throughout the holiday season, going up against the OnePlus 3T, which is strange in that the OP3 came out earlier in the year and is now upgraded to sell for the holidays. So we have two devices that have been around, the Galaxy S7 Edge stayed the same and the OnePlus 3T is an upgrade. Which one of these devices has what it takes to win this competition? Let’s see just what these two smartphones have in common and just how much they differ.

The Galaxy S7 Edge and the OP3T do have a few things in common. The displays are the same 5.5-inches and both use AMOLED technology and Gorilla Glass 4, however, OnePlus sticks to their Full HD resolution. This makes them close in physical size and they even weigh within 1 gram of one another. They both use a Snapdragon processor – the 820, and slightly improved 821, along with the same Adreno 530 GPU for graphics. They both offer a 64GB variant of internal memory – the Galaxy S7 Edge can be expanded, but the only option for the OP3T is to purchase a 128GB model. The main camera areas are very similar, and both take excellent photos. They both have a non-removable battery with the S7 Edge enjoying a slightly larger one with wireless fast charging built in, and both enjoy a fingerprint sensor for unlocking the device or authorizing mobile payments. The usual suspects are here – WiFi, Bluetooth v4.2, GPS, NFC, and a USB port – microUSB v2.0 on the S7 Edge and the newer Type-C reversible on the OP3T.

Samsung released the Galaxy S7 Edge in April, and it would normally be just an afterthought by now. The Samsung Galaxy Note is usually front and center, but a funny thing happened on the way to this scenario…the Galaxy Note 7 was recalled. After the Note 7 recall, Samsung called the S7 and S7 Edge back into action with sales promotions and even made available the popular Blue Coral on the S7 Edge model. The Galaxy S7 Edge has the same metal and glass design, and even the aged dual-curved screen still looks awesome. How does this aging premium smartphone hold up to the revamped OnePlus 3T? Let’s look and see just how they compare to one another.

The Galaxy S7 Edge has an always-on display that lets you see your notifications at any time – no need to turn on the primary display and this really helps to conserve battery life. The dual curved edges not only add beauty to the phone but they do provide some limited functionality with quick access to several features. With a Samsung device, you get Android Pay and have the option of using Samsung Pay, which allows you to expand your mobile buying power. The Galaxy S7 Edge packs in a heart rate monitor, oxygen saturation sensor, quick wireless charging, and IP68 dust and water resistance. The S7 Edge measures 150.9 x 72.6 x 7.7 mm, weighs in at 157 grams and is available in Black, White, Gold, and Silver, costing about $790 – however, bargains and specials are everywhere.

The OnePlus 3 and the OnePlus 3T are identical except for a subtle color change to a Gunmetal color, a slightly faster processor (10-percent), a larger battery (3000mAh to 3400mAh), an improved scratch-resistant lens cover on the primary camera, and changes in memory storage capacity. The changes are certainly an improvement over the OP3 – a larger battery and faster processor, and more memory is always nice to have. Maybe OnePlus wanted to beat the holiday sales rather than wait until the usual spring launch date. It almost makes you wonder what OP has in store for the spring. We are looking at an all-metal device that has excellent build quality, but how does it hold up to the Samsung Galaxy S7 Edge?

OnePlus is another company that seems to keep away from QHD displays and the OnePlus 3T does not deviate from the path with a Full HD display. It does sport the OnePlus 3T’s new 5.5-inch FHD Optic AMOLED display with a resolution of 1920 x 1080 pixels and a respectable 401 PPI. Although OnePlus used the Qualcomm Snapdragon 820 quad-core processor for their OP3 they decided to up the stakes here on the OnePlus 3T to include the new Snapdragon 821 with the same sized dual-core clocked at 1.6GHz and another at 2.15GHz and running an Adreno 530 GPU for excellent graphics. OnePlus then packed in a full 6GB of DDR4 RAM and 64GB of the faster UFS 2.0 non-expandable internal storage, although you can now order 128GB of internal memory.

OnePlus has done a great job upgrading the camera area on the original OP3 and now, again, on the new OnePlus 3T. It still uses the same parts and pieces but does have a more scratch-resistant sapphire lens with a new 16MP sensor for the OP3, with fast PDAF (Phase Detection Autofocus), LED Flash, a large f/2.0 aperture, and they threw in OIS for extra stability. The FFC camera increased from 8MP to a whopping 16MP with a f/2.0 aperture for terrific social selfies and video chatting. The OnePlus 3T has a non-removable battery that jumped to 3400mAh in size that includes their rapid charge they call Dash Charge that will give you up to a 60-percent charge in only 30 minutes.

OnePlus is growing into a full-fledged developer – they included both a fingerprint sensor and NFC chip on their OnePlus 3T, allowing the device to make mobile payments and Android Pay purchases with a swipe of your finger. Thankfully, OnePlus decided to make a North American  model for the US. It runs mostly stock Android 6.0.1 Marshmallow out-of-the-box with OnePlus’ OS called OxygenOS on top with the promise of Nougat to come. The OnePlus 3T measures 152.7 x 74.7 x 7.35mm and weighs in at 158 grams. It will cost you about $450 USD for the 6GB/64GB model and about $480 for the 6GB/128GB model. There is a choice of Gunmetal now, and Soft Gold is to come out in December. 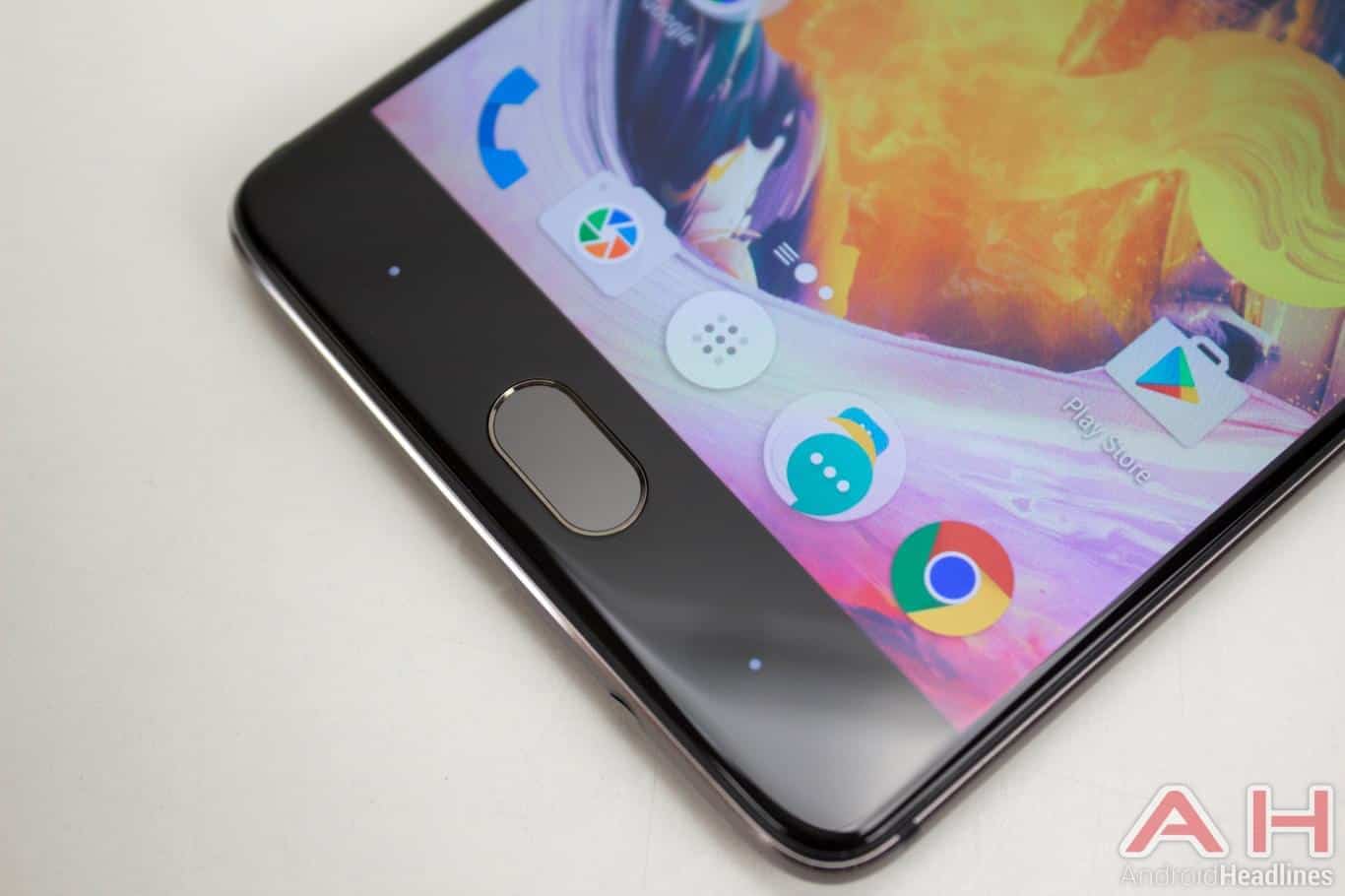 I never thought I would say this, but the winner of this comparison is the OnePlus 3T. It has a nice, solid, build, although certainly not as nice looking like the Galaxy S7 Edge, but it has good enough looks. It has the same size AMOLED display, a faster processor, more DDR4 RAM (4GB vs 6GB), an excellent camera area, and a North American model that will work on all US networks. No, it does not have IP68 water resistance, nor can you expand memory beyond 128GB, but you are getting 6GB of RAM and 128GB of memory for less than $500. That is quite a bargain when you compare it to the $790 Galaxy S7 Edge, and enough to convince me that the OP3T is too much of a bargain to pass up.

There is no doubt that the Galaxy S7 Edge is a fantastic device – it has beautiful looks, an excellent display,  good processor/GPU, and adequate memory. It has a heart rate monitor, oxygen saturation sensor, and wireless charging built-in. It also has an IP68 rating for dust and water resistance. For all of that beauty, you pay a dear price of $790 – true, there are sales and BOGO at times, but at less than $500, the OnePlus 3T with 6GB/128GB is still the winner.