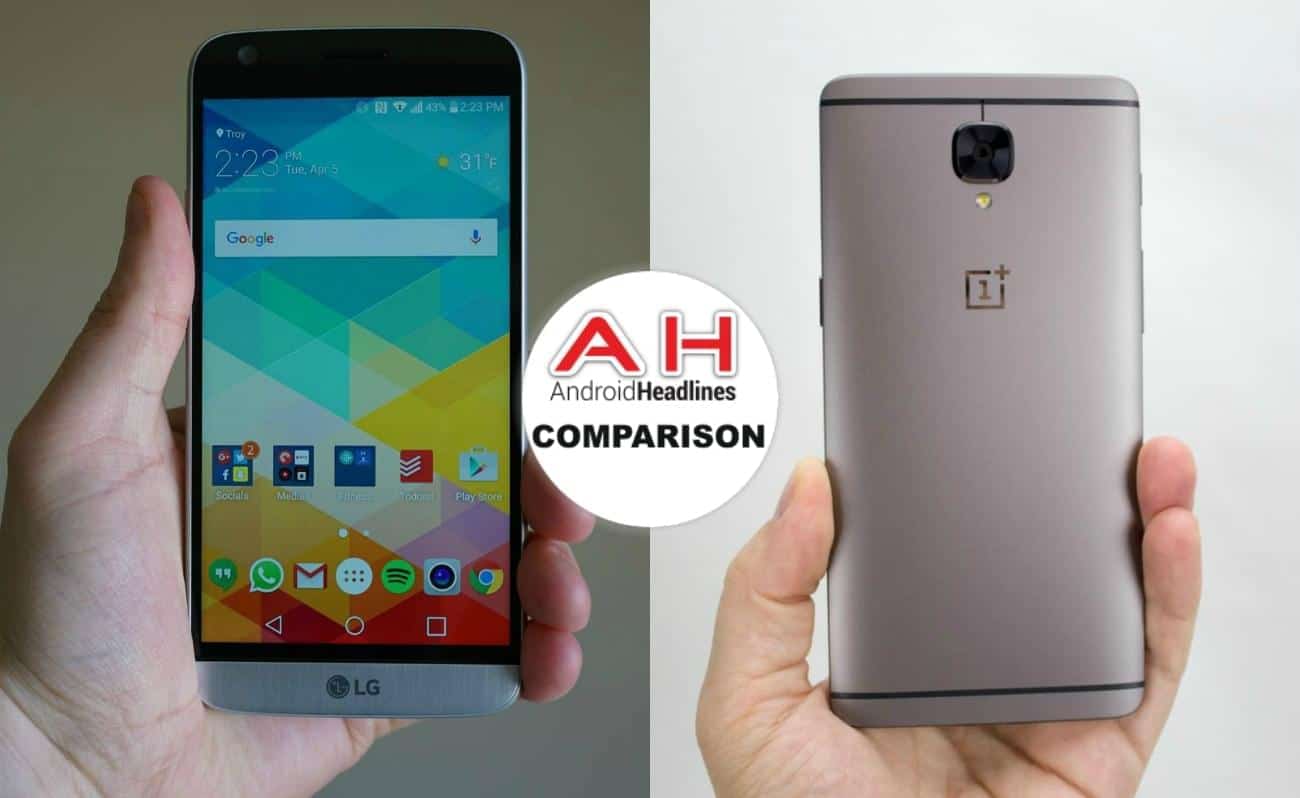 Do we have a good one for you today – the LG G5 takes on the updated OnePlus 3T. LG took the smartphone world by storm with the modular LG G5 as it was quite a departure from the popular LG G4. The LG G5 is an all-metal design with a removable ‘chin’ at the bottom of the device. There you can add a new battery or slide in a module to add more functionality to the phone. The OnePlus 3T is an upgraded version of the OnePlus 3 that came out earlier this year. Many people wondered why they would bother upgrading, but you cannot argue with the results, especially with a North American version sold in the US. This all-metal device has an upgraded processor, larger battery, and more base memory. When it comes to specifications, just how do these two smartphones stand up to one another? Let’s take a look and see just what these two devices have in common and then we will look at each one in greater detail.

The LG G5 and OnePlus 3T have very little in common other than their physical dimensions with the OP3T just slightly larger due to its larger display – 5.3-inch versus 5.5-inches – and the LG G5 weighing in at only 1 gram heavier. Both devices use a different resolution for their displays, and different technology. When it comes to processors, they picked the best available at the time – the LG G5 uses the Snapdragon 820 quad-core, and the OP3T uses the updated Snapdragon 821, which Qualcomm claims gives it a 10-percent boost in performance. They both use the same Adreno 530 GPU, which will handle the most demanding graphics. Only the 32GB LG G5 has room for expansion while the OP3T has a 64GB or 128GB version. The main cameras use very different configurations, but both put out great pictures. Both have a fingerprint sensor to unlock the device and NFC to authorize mobile purchases. They have the usual suspects – WiFi, Bluetooth v4.2, GPS, NFC, and the new Type-C reversible port for charging and data transfer.

LG had a great idea to use modules to expand their smartphone capabilities. The public does not seem to agree with LG and the new LG G5. Even after promising the modules would work in the next generation devices, LG has already said that they will drop the modules on the next LG G6. Whereas the new Moto Z line of phones also includes Moto Mods, they are far less evasive as they snap on the back of the device via magnets. People seem slow to purchase a phone that ‘comes apart’ and there appear to be more doubters than adopters at this point. LG also made a move to an all-metal design that they painted to hide the antenna lines. Let’s take a closer look at the new LG G5 and see just how the specs and design hold up to the new OnePlus 3T.

The LG G5 sports a 5.3-inch IPS LCD QHD display and includes the ‘always on’ feature and a resolution of 2560 x 1440 pixels with 554 pixels-per-inch (PPI.) LG went with the best processor available at the time – a 64-bit Qualcomm Snapdragon 820 quad-core processor with dual cores clocked at 1.6GHz and another dual-core clocked at 2.15GHz. That is paired up with the Adreno 530 GPU that will handle any demanding graphics. The LG G5 packs 4GB of DDR4 RAM and 32GB of internal memory that is expandable to 2TB via a microUSB card.

The LG G5 packs two primary cameras that operate independently from one another. One is the same 16MP sensor found in the G4, and then LG added an extra 8MP wide-angle sensor. The LG G5 will use the 16MP shooter to take a standard picture, but if the user needs to capture a wider shot, the camera can use the 8MP wide-angle lens. LG retained the 8MP front-facing camera (FFC) from the G4, allowing the user to take high-quality selfies and video chatting as well. LG decreased the battery size to 2800mAh in the G5, but the modular design retains the ability to remove/replace the battery. For regular charging, the LG G5 uses Qualcomm’s Quick Charge 3.0 capabilities.

Once LG decided to run with the module design with the removable lower chin, they could no longer place the fingerprint sensor at the bottom front of the phone. LG positioned it on the back of the phone where the innovative on/off and volume control resided on the LG G4. The good news is that the fingerprint sensor still acts as an on/off switch, but the volume controls were moved to the side of the LG G5. The LG G5 retained its IR Blaster and FM radio and has Hi-Res sound for listening through earphones. The LG G5 measures 149.4 x 73.9 x 7.7 mm, weighs in at 159 grams and comes in Silver, Titan, Gold, and Pink. The device is available on all the leading carriers for $625.

The OnePlus 3 and the OnePlus 3T are identical on the outside except for a subtle color change to a Gunmetal color. The real updates are inside where you will find a slightly faster processor, a larger battery, an improved scratch-resistant lens cover on the primary camera, and changes in memory storage capacity. Why OnePlus did this is still a mystery, perhaps OnePlus wanted to increase the holiday sales rather than wait until the usual spring launch date. It now makes us wonder what OP has in store for their spring release. We are looking at an all-metal device that has good build quality and excellent value, but just how does it hold up to the LG G5?

There are certain manufacturers, like OnePlus, that seem to shy away from QHD displays and the OnePlus 3T does not deviate from that course. It does sport the OnePlus 3T’s new 5.5-inch FHD Optic AMOLED display with a resolution of 1920 x 1080 pixels and a respectable 401 PPI. OnePlus used the Qualcomm Snapdragon 820 quad-core processor for their OP3 but decided to up the stakes here on the OnePlus 3T to include the new Snapdragon 821 with the same dual-core clocked at 1.6GHz and another at 2.15GHz and running an Adreno 530 GPU for excellent graphics. OnePlus then packed in a full 6GB of DDR4 RAM and 64GB of the faster UFS 2.0 non-expandable internal storage – up from 32GB – although you can now order 128GB of internal memory and still keep the price under $500.

OnePlus did a great job upgrading the camera area on the original OP3, and it now carries over on the new OnePlus 3T with the exception of a more scratch-resistant sapphire lens. The new 16MP sensor from the OP3 comes with fast PDAF (Phase Detection Autofocus), LED Flash, a large f/2.0 aperture, and OIS for extra stability. The FFC camera increased from 8MP to a large 16MP with a f/2.0 aperture for terrific social selfies and video chatting. The OnePlus 3T has a non-removable battery that jumped to 3400mAh in size that includes their rapid charge they call Dash Charge that will give you up to a 60-percent charge in only 30 minutes.

OnePlus is growing into a full-fledged developer by including both a fingerprint sensor and NFC chip on their OnePlus 3T, allowing the device to make mobile payments and Android Pay purchases with a swipe of your finger. Thankfully, OnePlus decided to make a North American model for sale the US. It runs mostly stock Android 6.0.1 Marshmallow out-of-the-box with OnePlus’ OS called OxygenOS on top. OnePlus has promised that Nougat is not far behind. The OnePlus 3T measures 152.7 x 74.7 x 7.35mm and weighs in at 158 grams. It will cost you about $450 USD for the 6GB/64GB model and about $480 for the 6GB/128GB model. There is a choice of Gunmetal and Soft Gold.

The winner of this comparison is the OnePlus 3T. The OP3T has an excellent, reliable, build, and a 'business-like' attitude. It has a larger display, uses the AMOLED display, has a faster processor, more DDR4 RAM (4GB vs. 6GB), and an excellent camera area. It does not have the always-on display, nor can you expand memory beyond 128GB, but you are getting a Snapdragon 821 processor, 6GB of RAM and 128GB of memory for less than $500. That is quite a bargain when you compare it to the $625 LG G5 that is enough to convince me that the OP3T is too much of a bargain to pass up.

There is no doubt that the LG G5 is an unusual device – it has good looks, an excellent display,  good processor/GPU, and adequate memory. For the option of using modules, you pay a price of $625 – true, there are sales, but at less than $500, the OnePlus 3T with 6GB/128GB is still the winner, especially if you have no need for modules.