Do we have a good one for you today – the ASUS ZenFone 3 Ultra goes up against the Google Pixel XL. The Ultra uses a new Aerospace-grade aluminum alloy body, and ASUS cleverly hide the antenna lines on the side of the device and eliminate those lines on the back of the device. The Pixel XL has a polished glass and metal back where the fingerprint sensor resides. Both devices have a solid build and a nice, clean, design, although the ASUS ZenFone 3 Ultra would probably win in the looks department. Let’s look at some of the similarities between these two devices before we look at each one individually.

The ZenFone 3 Ultra and the Google Pixel XL have very little in common. The size difference starts us off on the wrong foot. At 5.5-inches, the Google Pixel XL is considered a phablet but wielding a 6.8-inch display, the Ultra could be regarded as a small tablet – certainly not something, you would be comfortable carrying around in your pocket as an everyday driver. Besides the screen size, the Ultra uses IPS LCD technology and an FHD resolution, whereas the Pixel XL uses an AMOLED display and a QHD resolution. Both use a Snapdragon processor and Adreno GPU for graphics, but different models. They both pack 4GB of RAM and offer expandable memory. Both devices have a great camera area, and either one will satisfy any photo buff and large enough non-removable battery to get you through the entire day and both offer rapid charge. They both have a fingerprint sensor for unlocking your phone and the Pixel XL can authorize mobile sales as well. The usual suspects are there WiFi, Bluetooth v4.2, GPS, and a reversible Type-C USB port for charging and data transfer.

Getting rid of the Nexus era and bringing in the Google Pixel era helps Google to have its own ecosystem, much like Apple, where you purchase only Google products because they all work together. The Google Pixel smartphones are the first to incorporate Goggle Assistant directly onto the device. From your Pixel XL, you can communicate directly with Google’s new Home products. Google is hoping that if you buy one device, you will want them all. For this comparison, we will be looking at how well the Google Pixel XL with its polished glass and metal construction holds up to the all-metal ASUS ZenFone 3 Ultra.

The Google Pixel XL comes with a 5.5-inch QHD AMOLED display with a resolution of 2560 x 1440 pixels with 531 pixels-per-inch (PPI.) Google used the newest Qualcomm Snapdragon 821 quad-core processor with a dual-core clocked at 1.6GHZ and a dual-core clocked at 2.15GHz and said to increase performance by 10-percent. It is paired that to the powerful Adreno 530 GPU to handle those demanding graphics. It packs 4GB of DDR4 RAM and 32GB or 128GB of the faster UFS memory, as there are no means to expand the built-in memory. Google did include a large 3,450mAh battery for power, and it has rapid charge capabilities.

It was nice to see Goggle include a terrific camera in both Pixel models. The Nexus 6P had a great camera, and we were hoping for the same from Google this year. When we first looked at the specifications, they seemed quite modest – with only a 12.3MP sensor for the primary camera along with an aperture of f/2.0, phase detection autofocus (PDAF,) a dual-tone LED flash, and no OIS, instead opting to use EIS (Electronic Image Stabilization.) However, after DxOMark tested the camera, it was awarded an ‘89’ – the highest rating yet for a smartphone camera. Google also included an 8MP front-facing camera (FFC) that comes with a f/2.0 aperture, a 1.4µm pixel size, and 1080p video support. This combination of specs offers up great selfies to share with your friends on social media as well as video chatting.

The new Google Pixels are priced rather high for what you get as they did not include a lot of ‘bells and whistles’ such as a heart rate monitor, exercise app, or memory expansion. You will find Google Assistant built in that will work with other Google products such as Google Home. Of course, you can make Android Pay and mobile payments. It will be running Android 7.1 Nougat out of the box and receive the fastest software updates. It is only IP53 rated against dust and splashing water. The Pixel XL measures in at 154.7 x 75.7 x 8.6mm and weighs in at 168 grams. There are three different colors available: Quite Black, Very Silver, and Really Blue (a limited edition color.) The Pixel XL comes with either 32GB or 128GB of storage, and it will cost you about $770 for the 32GB model. 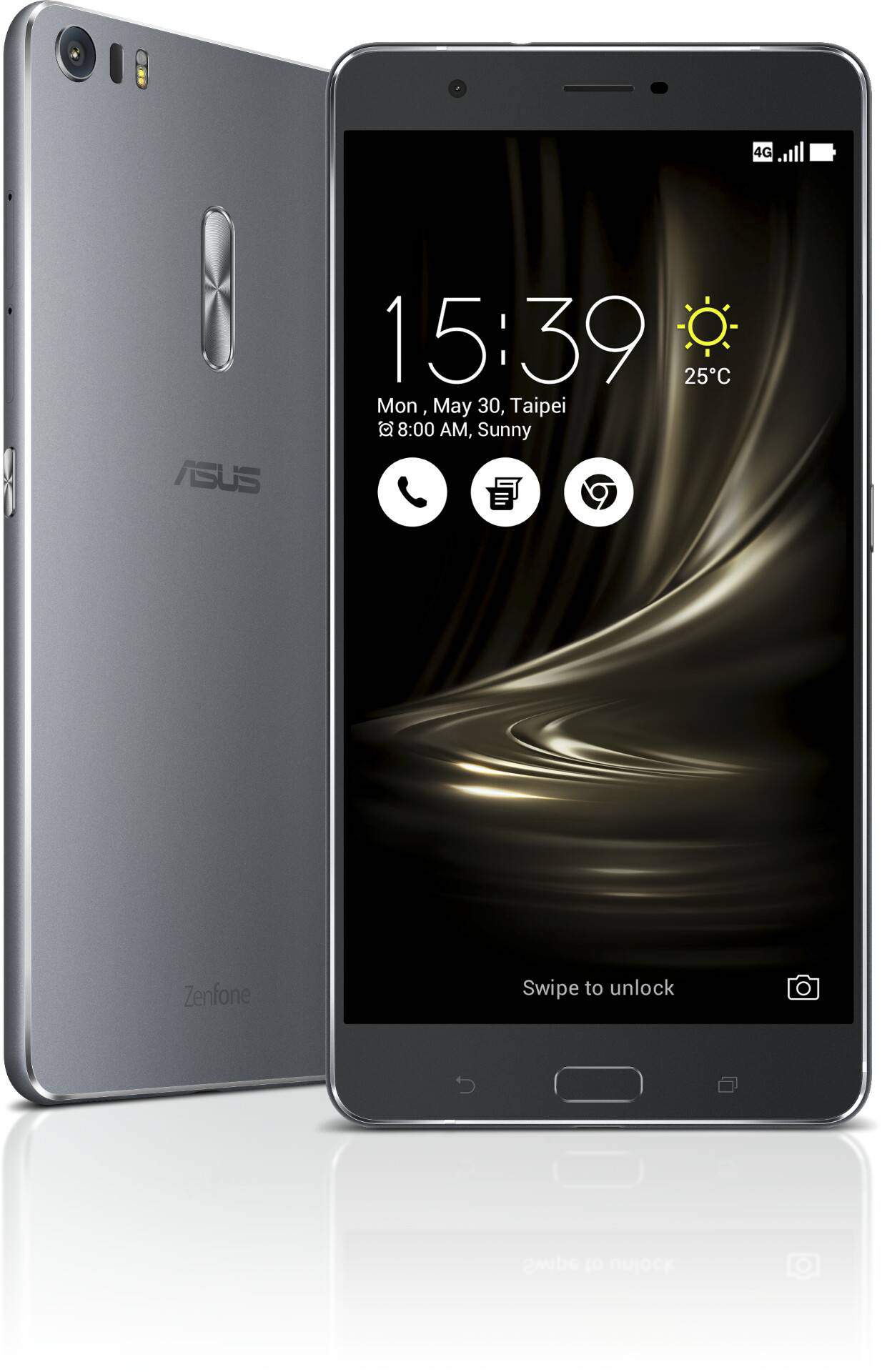 ASUS are well known for computers but wisely started producing smartphones. For its new line of ZenFone 3 smartphones, ASUS made many improvements. They are a beautiful all-metal body with the antenna lines hidden in the edges of the device. The ‘Deluxe’ model is the actual flagship of the three whereas the ‘Ultra,’ is so named because of its large 6.8-inch display. The ZenFone 3 Ultra model with 4GB of RAM and 64GB of UFS memory is the model we will be comparing today. Let’s take a closer look at the Ultra model and see just how it stacks up against the Google Pixel XL.

The ZenFone 3 Ultra is more like a tablet with its massive 6.8-inch IPS LCD display and Full HD resolution of 1920 x 1080 pixels and 324 PPI. The Ultra is a little larger than most people would want to carry around all day in your pocket. ASUS went with the mid-range 64-bit Qualcomm Snapdragon 652 octa-core processor with a quad-core clocked at 1.4GHz and a quad-core clocked at 1.8GHz. ASUS uses the Adreno 510 GPU to handle the graphics. It boasts 4GB of slower DDR3 RAM (a restriction of the processor) and 64GB of faster UFS 2.0 memory – like that used in the Pixel XL – but is expandable to 200GB via a microSD card.

ASUS really improved the camera area on their new models with the Ultra model having a primary camera with a large 23MP Sony IMX318 sensor with a f/2.0 aperture, 6-element Largan lens, and 0.03-second TriTech Autofocus – it uses both Laser and Phase Detection Autofocus (PDAF.) ASUS even went with a 4-axis OIS for more stability and then added a dual-tone flash. The ZenFone 3 Ultra gives you an 8MP FFC with a f/2.0 aperture and 85-degree wide-angle lens for selfies and video chatting. A large, non-removable, 4600mAh battery with Quick Charge 3.0 powers the device.

The ASUS ZenFone 3 Ultra comes with a rear-mounted fingerprint sensor for unlocking the device, although it lacks an NFC chip for mobile payments. It has a nice pair of bottom-mounted stereo speakers that will make watching movies and videos more enjoyable. The Ultra arrives running Android 6.0.1 Marshmallow with the newest ZenUI 3.0 running over the top. The Ultra measures 186.4 x 93.9 x 6.8mm and weighs in at 233 grams. It is available in Glacier Silver, Titanium Gray, or Metallic Pink and it will cost you about $480 with 4GB of RAM and 64GB of memory.

As far as specifications go – the Pixel XL is the clear winner here. It has a better display (AMOLED QHD), better processor, faster RAM (DDR4 vs. DDR3), and GPU. The Pixel XL has NFC for mobile payments and is IP53 certified for water splashes. These features come with a price tag of $770. Using the Pixel also gives you access to  Google Assistant.

The ZenFone 3 Ultra has an ‘ultra’ large display and dual speakers that make it an ideal device to watch movies or videos…not to mention the 4600 non-replacement battery. For just under $500, it is quite a buy, but you miss many excellent specifications. If you only use the device for watching movies or playing games, then the cheaper Ultra may be the best device for you. However, if you want a real flagship with the best of everything, then the Pixel XL is one for you.