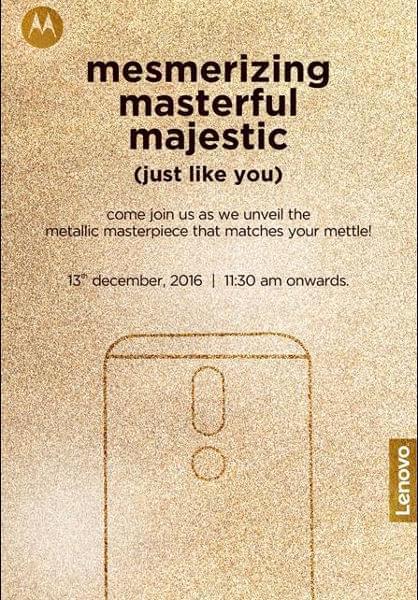 Motorola had introduced several interesting smartphones this year, led by the Moto Z and Moto Z Force smartphones, which are the company's flagship offerings for 2016. Having that in mind, the company had released some more affordable devices as well, phones like the Moto G4 and Moto G4 Plus, and also the Moto M which actually arrived last month. The Moto M handset was originally announced in China, but it was only a matter of time before it arrives to other markets. We presumed that the phone will launch in India, though we did not have any official info, well, until now.

The company has started sending out invitations for the Moto M launch in India. If you take a look at the provided image, you'll get to see a sketch of the back of the Moto M, and that, in addition to the rest of this image, more or less confirms that the Moto M is coming. Motorola is describing this handset with the following words: mesmerizing, masterful and majestic. The image reveals that the Moto M handset will land on December 13th in India, the event is starting at 11:30 (local time). Now, the company is almost certainly planning to release the same device they announced in China last month, both in terms of the design and specifications. This means that we'll get a metal-clad handset which will sport the 'Moto' branding below the display, and a rear-facing fingerprint scanner. The device's power / lock and volume rocker keys will be placed on the right, and its SIM card tray will be available on the left.

Now, considering the Moto M had been announced in China last month, we have its specs as well. The Moto M features a 5.5-inch fullHD (1920 x 1080) AMOLED display, 4GB of RAM and 32GB of internal storage (expandable up to 128GB via a microSD card). The device is fueled by the Helio P15 64-bit octa-core processor running at 2.2GHz, while the Mali T860MP2 GPU is also a part of this package. On the back of the device, you'll notice the 16-megapixel snapper (f/2.0 aperture, 1.0um pixel size, PDAF), along with the dual-tone LED flash. The 3,050mAh battery is included here, and it offers fast charging, while there are two SIM card slots available inside of this phone. Android 6.0.1 Marshmallow comes pre-installed on the Moto M, and the device weighs 163 grams. The Moto M was originally launched in Gold and Silver color options, and chances are both of those colors will be available in India as well.