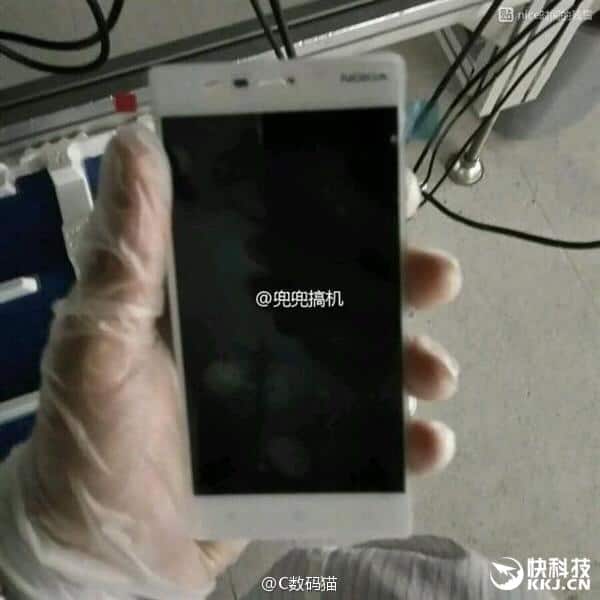 Nokia is all set to make a comeback to the smartphone market in 2017 and we’ve seen today more pictures and designs showing a new Nokia device, claimed to be the Nokia E1. Nokia were prevented from selling smartphones following the takeover of the Nokia branding and manufacturing by Microsoft in 2014. Under Microsoft’s stewardship, the Lumia brand of former Nokia branded devices, running Windows 10 Mobile, have struggled in the market dominated by Google’s Android with Apple’s iOS a distant second in worldwide market share. During Nokia’s absence from the consumer market, we have seen a number of leaked designs and blurry pictures of alleged prototype models from the Finnish company, with reasonably conventional hardware running a version of Android software. The photograph presented here is once again somewhat blurry, but it’s another image backing up the Finnish company’s re-entry into the smartphone market.

During the last two and a half years we have seen Nokia introducing a tablet into select markets around the world. The Nokia N1 tablet, based around a near-stock version of Android and running over Intel Atom architecture, was well received and had a respectable specification and some clever software tricks. However, the tablet market is declining as customers move towards either larger screen smartphones or small but powerful laptops and Chromebooks: Nokia may be able to sell their branded tablet, but a smartphone should be an easier product to shift especially considering the company’s reputation for good quality devices that are easy to operate, have better than average cameras and good call quality and signal attenuation.

As for the specifics of this particular Nokia branded device, unfortunately the details are sparse. We do not know what version of Android the device runs but from the source website, it appears that this device has 4 GB of RAM and 64 GB of internal storage. However, the screen size, type and resolution is unknown, as is the underlying chipset and hardware. Nokia have given the device hardware buttons under the screen, which goes against Google’s guidelines, but there are two designs showing here: one appears to have a fingerprint sensor on the front and the other does not, which might indicate that Nokia are preparing both higher-level and lower-level devices. Production appears to have all but started in an undetermined location somewhere in China, but we do not know what markets the new Nokia smartphones will be sold into.