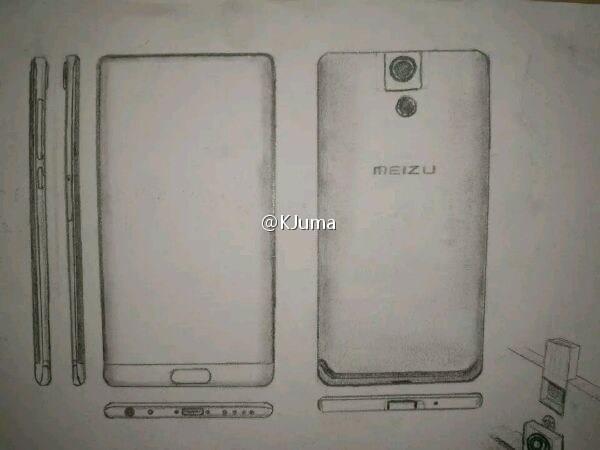 Meizu's concept smartphone has been mentioned in various rumors and leaks thus far, and a brand new leak just surfaced. If you take a look at the gallery down below, you will see a couple of sketches which are showing off a really sleek-looking Meizu-branded smartphone. Now, this is, allegedly, Meizu's upcoming 'Legent' flagship, and these images now only reveal the design of the device, but also its partial specifications, read on.

As you can see, this smartphone comes with an almost bezel-less display, which is also curved. The phone has a small chin below the display, where you'll notice Meizu's multifunctional home key, but the phone has no bezel on the top, or its left and right sides. The device seems to be quite thin, and it also offers a reversible camera module, which acts as a rear-facing camera until you flip it out, in which case it becomes a front-facing shooter, as you can see in one of the images down below. The Type-C USB port will be placed on the bottom of this smartphone, and will be flanked by the loudspeaker and a 3.5mm headphone jack, if this leak is to be believed, that is. The company's branding is placed on the back of the device, and the phone's home button will almost certainly act as a fingerprint scanner as well.

The Meizu Legent seems to be made out of metal, and according to this leak, the phone will sport a 5.7-inch QHD (2560 x 1440) display. In addition to that, you'll also get 6GB of RAM and 64GB or 128GB of internal storage here. The source claims that the phone will be fueled by the Exynos 8893 SoC, which is Samsung's processor, of course, and the 16-megapixel camera will be placed on the phone's back side. Android 7.0 Nougat will come pre-installed on the Meizu Legent, and on top of it, you'll be able to find Meizu's Android-based Flyme 6 OS. The 3,400mAh battery has also been mentioned in this leak, and it seems like it will not be removable. We still don't know when is this phablet supposed to land, or is this leak legit, but if it is, chances are we'll see more similar leaks in the following weeks, so stay tuned.