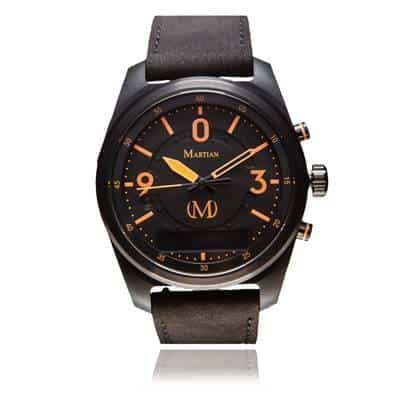 Smartwatches are still struggling to become mainstream, even though wearable technology is steadily gaining ground among consumers worldwide. This was once again established by the recent report from IDC that revealed how fitness bands and health trackers are continuing to climb the sales charts, even though demand for smartwatches isn't anywhere near what the industry would have hoped for a couple of years ago. However, that isn't stopping companies from bringing new products to the market, with the latest case in point being the Martian mVoice smartwatches that will go on sale in the U.S. with immediate effect. The most remarkable feature of the brand new smartwatch is that it comes with Amazon's voice-based intelligent personal digital assistant – Alexa.

According to a press release from the company earlier today, the mVoice smartwatch starts at $295 and will be available on Amazon with immediate effect. The device, Martian claims, "combines the classic design of an analog watch with the functionality of a smartwatch". Which is yet another example of how smartwatch makers are trying to shed their geeky image to find favor with a more mainstream audience. The company also says that the integration of Alexa will help the mVoice deliver a simplified and enhanced digital communication platform to help people perform their everyday tasks. The smartwatch has an app that can be downloaded from the Google Play Store to provide users access to over 5,000 Alexa skills.

Called the 'Martian Voice & Alerts', the software allows customers to control their smart homes at the tap of a virtual button or hail a cab with ride-hailing services like Lyft. What's more, being Alexa-supported also allows it to do a whole lot of stuff that has mostly been the domain of Amazon's own hardware until recently. Now that the floodgates have opened though, the Alexa-integration will not stop with devices like the mVoice, 'C by GE', or the 'Neato Botvac Connected'. Martian is apparently working with GUESS Watches to bring Alexa and its long line of skills to the GUESS Connect, which happens to be the smartwatch line launched by American fashion brand GUESS last year. It remains to be seen how all this works out for Martian, but having Alexa at your beck and call 24-hours a day does seem like a rather enticing proposition, whichever way you look at it.