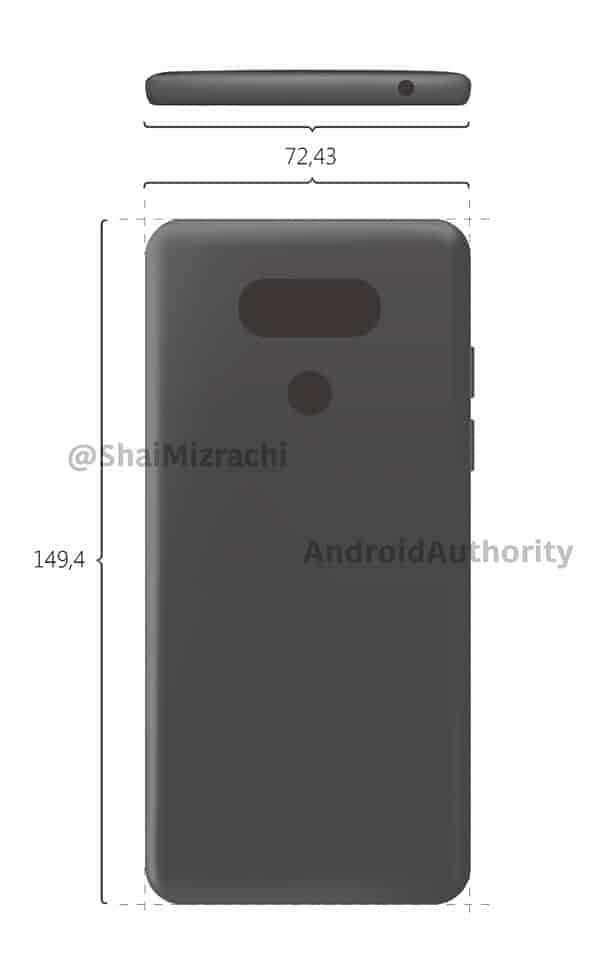 The LG G6 is one of the most anticipated smartphones of 2017, and it is expected to launch in the first half of next year. Well, the phone’s first render just surfaced, and it actually reminds us of both the LG G5 and LG V20. If you take a look at the provided image, you’ll get to see the leaked render which comes from Shai Mizrachi who decided to partner up with Android Authority this time around and leak LG’s upcoming flagship. Mr. Mizrachi did a good job when it comes to leaks in the past, which gives this leak at least some credit.

As you can see, the phone resembles both the LG G5 and LG V20, at least from the back, we don’t really get to see the rest of the device, only its back and top sides. The device’s volume rocker keys will be separate buttons, and they will be placed on the left-hand side of this device. The power / lock key is not present on the right, which probably means that the cutout on the back will serve as both the power / lock key and a fingerprint scanner. Based on the camera cutout on the back, we’ll be getting two rear-facing cameras once again, which might not be a bad thing considering both the LG G5 and LG V20 have really capable shooters. The 3.5mm headphone jack will be placed on the top of the device, at least according to this leak. Now, in addition to all this, the source also revealed the dimensions of the device, if the info is accurate, the LG G6 will measure 149.4 x 72.43mm, while we still don’t know how thick will the phone be. These dimensions suggest that the phone will be quite compact, as the LG G5 sported really similar dimensions. The phone’s dimensions suggest we can expect its display to be somewhere in between 5.2 and 5.5-inches big.

The LG G6 will almost certainly ship with a QHD (2560 x 1440) display, no matter how big it is. You can also expect it to sport 4GB / 6GB of RAM, and Qualcomm’s Snapdragon 835 SoC will probably fuel this smartphone. LG is expected to use metal in order to build this smartphone, and chances are its back cover will be removable, similar to what the LG V20 has to offer, which also means that the device could sport a removable battery.