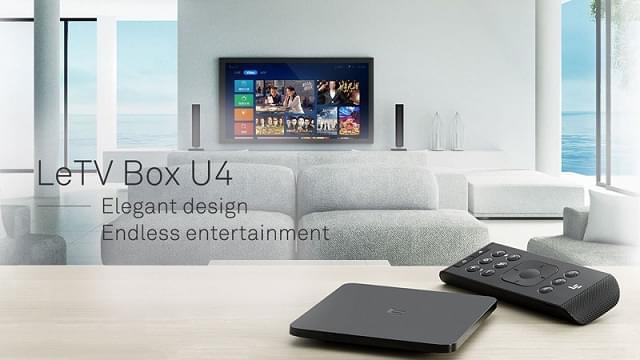 Earlier today, LeEco formally introduced its very own TV box named the LeTV U4 TV Box. Unlike the numerous other TV boxes available in the market, this one comes in with a highly portable size. In fact, it is flat and has been recognized as one of the slimmest TV boxes ever released in the Android TV market. Its dimensions only measure 100 x 100 x 10.8 mm along with a weight of 157 grams, proving it to be a very portable TV box.

Despite its size, the LeTV U4 comes with equally capable specs. Inside, the TV box runs on a 2GHz Amlogic S905 Quad-Core processor paired with 2GB of SSR3 RAM and 750MHz Mali-450 GPU. It is sold in two storage options– the first with only 8GB of eMMC storage while the more pricey model comes with 16GB of eMMC storage. Both models include Bluetooth 4.1 and a dual-band Wi-Fi.

As is the case with plenty of today's TV boxes, the LeTV U4 TV Box can support 4K resolution video output. And since it is compatible with a vast collection of video and audio encoding formats, you can easily choose the media content you wish to play on the device. LeEco has made the LeTV U4 TV Box pre-installed with Android 6.0 Marshmallow. On top of the software, the TV box runs EUI 5.8; a UI similar to that on the SuperTV range of products offered by LeEco.

As of this writing, the TV box is exclusively sold in China. Its prices depend on a number of factors, including the storage option chosen for the device. The lowest price for the TV box is $43 (299 Yuan), which comes with 8GB of storage, an infrared remote control, and a month's subscription to super sports. At $58 (399 Yuan), you can get six months subscription to super cinema along with the standard version of the device. If getting the U4 Pro Eco version that comes with 16GB storage, Bluetooth, voice remote control, 1-month membership to super sports, and 1-year membership to super TV, you can expect to pay $72 (499 Yuan). For its price and slim figure, the price is quite a deal. Unfortunately, LeEco has not announced other markets where the TV box will be made available.